I found myself with a couple of hours quiet time this morning and with the 18mm armies looking in good shape I decided to get out the old Commands & Colors board to play a quick 12 units per side game. Five command cards per side, French to move first, 5 VP's for the win. Must admit I was a bit rusty to begin with, but it soon came back to me, although I had to look up a few rules such as cavalry breakthrough and terrain effects (fighting uphill etc).

I played both sides as best I could and when discarding a card and drawing a replacement I did not look at it until it was that sides turn again. Both sides had fairly balanced hands which enabled fighting across the three sectors, the Anglo Spanish side held a 'bayonet charge'card which was only played on the final turn and effectively won the game 5/3. The 60th rifles and the Cacadore rifles fought well in the centre, although they took heavy casualties from a French battery before they put it out of action. As one would expect the battalion of British light infantry ( 5 blocks so rolling 5 dice when firing stationary) were a force to be reckoned with and gained 1 VP by destroying a French battalion with a single volley! French cavalry performed well. The Spanish (consisting of 2 line battalions, a militia battalion and a light infantry detachment), never really got into the fight, the line battalion that did advance was forced to retreat right back to the baseline by artillery fire (2 flags, retreating 2 hexes per flag).

All in all I really enjoyed myself and it reminded me just what it was that so attracted me to this game when I was first introduced to it by 'Foy' about 8 years ago now. 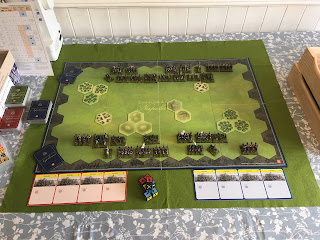 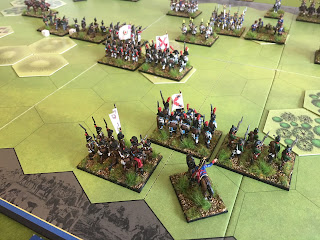 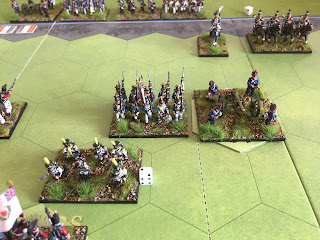 The armies are coming on well now, so a game of DBN will be next up. I have managed to find a second hand card table 750 x 750mm which requires a bit of TLC but will prove perfect for the rules and will allow me to play in comfort. 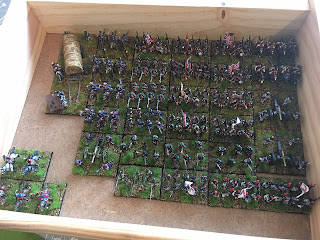 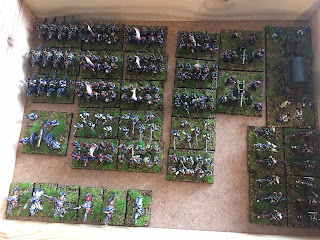