This morning I spent a couple of hours setting up and playing a game of DBN based upon a scenario  randomly selected from One Hour Wargames by Neil Thomas. This was Double Delaying Action, scenario #9. Basically, both forces are attempting to reinforce their respective larger armies five miles to the North. The Anglo/Portuguese force army may deploy anywhere to the North of the river while the French begins the game off table to the South entering anywhere along the Southern edge on turn 1. Essentially both sides aim to move units off the North edge of the table with some mandatory timings placed upon the British withdrawal of units.

It's a Peninsular War based battle, and I selected 12 point forces as below:

The main purpose was to see how suitable DBN could be for use with the OHW scenarios, and I wanted to record my overall impression rather than a full AAR.

Things began well. In DBN you roll a single D6 to see how many Command Action Points you have for the bound and the attacking French rolled a 6 and the attacker gets a +2 CAP's on first turn, excellent. The columns steamed towards the bridges with 2 units of light cavalry being first to cross. British bound and a 1 rolled for CAP's! I could do nothing but advance a battery of Horse artillery, which whilst having a shorter range than their foot brethren CAN move and fire. No hits. As the French started to come into musket range of two rather splendid looking Portuguese line units supported by cacadores I expected to see the casualties quickly mount up on the advancing French but volley after volley failed to score a hit which was quite simply down to terrible dice rolls. the French beating the active firers result each time. This happened across the front, on one occasion I had no less than 4 fire combats, some with supporting artillery or other infantry bases but again the French beat the British dice scores resulting in ineffectual fire. The French attack columns stormed onwards as the 95th rifles were driven out of the village by artillery fire (a high D6 roll), taking 1 hit and recoiling 600 paces, allowing the French infantry to move through the village and out the other side where more British line infantry stood waiting for them. Once again with both sides infantry having the same basic fire factor of '4' and both sides having a fire support it came down to that D6 roll with the active British again rolling low and the French rolling high, more ineffectual volleys!

I continued to play on, despite feeling a bit troubled at this point, French light cavalry successfully charged the Portuguese line but suffered hits in the ensuing combat, one unit going shaken (2 hits), fair result. Using artillery to support the fire of the infantry was still not sufficient to win a fire combat roll in some cases which I found a bit frustrating again down to poor die results in the roll off.

I could not help but to think back to my experience in the previous Commands & Colors game and how much more the game flowed, with the ramekin activation and order chit system allowing multiple units to be ordered in each bound. To roll a '1' on a D6 for CAP's on two consecutive bounds seemed almost beyond reason to me and I reached the conclusion that the wildly varied result of a D6 throw was causing the game to feel unbalanced in both movement and firing. Again I missed the good old C&C battle dice, so simple, and with the adjustments made under ramekin producing far more consistent results ( I made several test rolls).

Thus I find myself with something of a dilemma which is that whilst I do continue to enjoy playing C&C rules and especially with ramekin, I much prefer being able to use an open table free of grids. This may seem insurmountable, and maybe it is, but I'm giving it some thought.

Some photos from the game in the meantime. 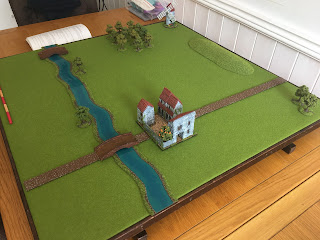 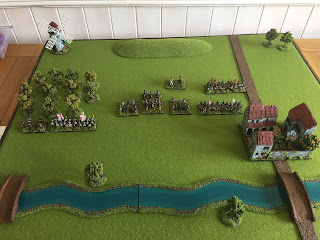 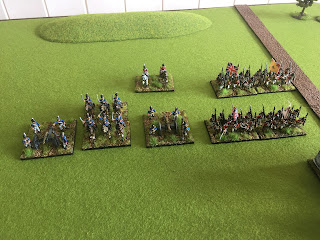 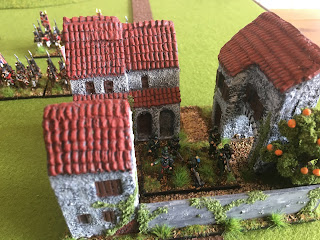 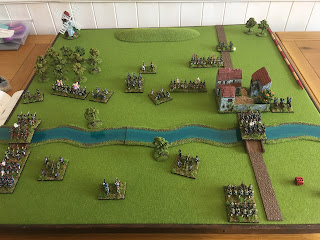 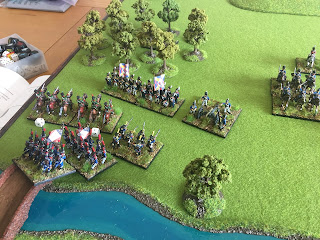 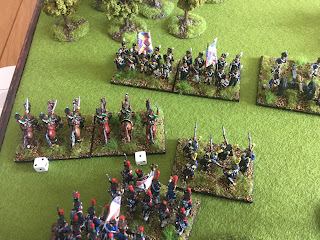 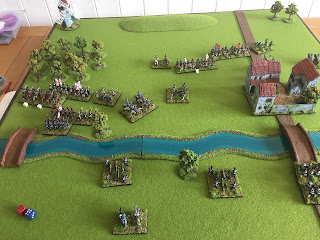 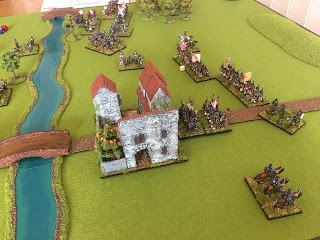 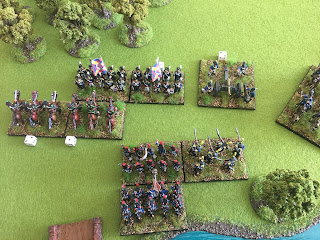