Lots to think about!

As the prospect of the dreaded No Deal Brexit grows ever closer, it has become one of the major talking points among British expats living in Spain. Healthcare, private pensions, tax, driving licenses are all considerations as our legal status here as non EU citizens will change. The major concern is healthcare, especially for those of us who have not yet acquired  full Spanish Residencia and health insurance, relying as many do upon the European Health Insurance card. Health care here in Valencia is excellent, and of course the EHI card provides us with peace of mind but a No Deal Brexit would effectively mean we may as well tear up that card.

The house remains on the market - our German buyers having pulled out saying they were unable to afford it, surely they would have known that at the beginning? - we have new agents who are far more pro active and have had four really positive viewings in the last week from non Brits. Our plan to return to the UK end of August is now on hold until we find a committed buyer. Funny enough we have started to make new friends here over the past few months and are enjoying life in Spain again. The prospect of returning permanently to a UK under Boris Johnson does not fill us with excitement! We are now re-considering retaining a base in Spain, non residencia, and spending more time each year back in the Uk with our family.

Next week my wife will be returning for a weeks holiday and we are both booked to return for a week in October that takes in the SELWG show at Crystal Palace. We have relatives who live close by the park there including my cousin and 95 year old Auntie Vi, who we are planning to visit.

This leads me onto a couple of hobby related matters. The RHA prints have still not arrived, its over 4 weeks now. Graham C has kindly said that he will print me 3 more so that Shaz can bring them back with her safely on her return. I have a sizeable order for paints, brushes, grasses, tufts, varnishes etc coming via eBay and requested tracked/registered mail which is very reliable and fast, 4 days UK to Spain on a previous order, I'll probably stick with this in future on all orders.

The Perry orders seem to be averaging 7 to 10 days to arrive now, standard International Mail, aside from that first one that took 28 days for some reason. I have another due this coming week which will complete the 7th French battalion, utilising some of the greatcoat wearing figures already painted. On order I have the following:

PEP 1  French Fusiliers, march attack in habits x10  ( Good deal on the basic line infantry figures, half price if you buy 10 for £22.50) They all still arrive in their individual black boxes of course.
PE 42  Eagle Bearer in surtoat.
PE 44 French sapper with axe over shoulder.
PE 45 Drum major.  (A magnificent figure that I could not resist!).

In addition there are 6 more Spanish Guerrillas to compliment the base below.

I'll probably retain the greatcoat wearing grenadiers (Sash & Sabre) and a few more to make up the numbers, should be a nice varied unit with some real characters.

Photos below show this weeks painting completed, the Spanish gun and crew, the first Guerrilla base and another 7 Voltiguers of the 15eme de ligne to complete that unit (skirmisher units are each of 2 bases, 6 or 7 figures).

Finally....... I know that I have the 60th rifles but I am just so tempted to add the 95th, I keep looking at them on the Perry site, and tell myself I must resist, but then they might just fill a gap while waiting for the Sash & Sabres to arrive, what am I to do? 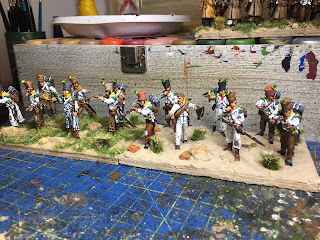 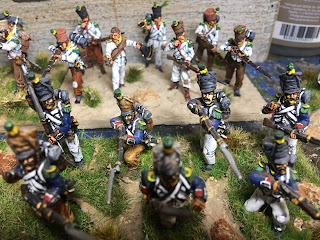 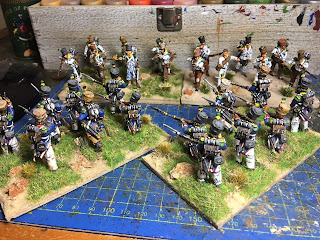 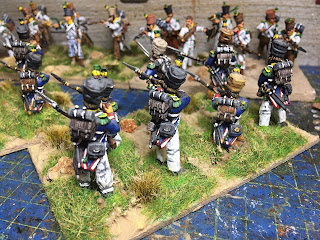