This week I have painted the second Guerrilla base of 6 figures. I wanted a character for this base and decided to use the figure from the S&S Spanish supply train set who arrived with the original purchase from Andy. I removed the whip hand, drilled out the sleeve and replaced with a spare sword arm, I think he looks suitably menacing. All other figures are by Perry Miniatures as I had not realised that S&S did a pack of 20 Spanish guerrillas for half the price per figure! 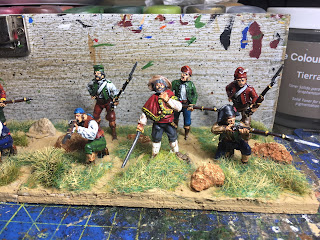 I now find myself at a bit of a loss whilst I await delivery of more 40mm figures. I have 22 Perry French on order and they will be painted as the Italian 2nd line regiment regiment in white coats with red facings. I painted a couple of leftover Perry fusiliers as test figures, something I don't generally do but they turned out well. I have a lovely flag for this unit so they should look pretty smart once completed. I will re check references for the uniforms, collars seem to vary but this image is a good one, although I will need to repaint collars white. 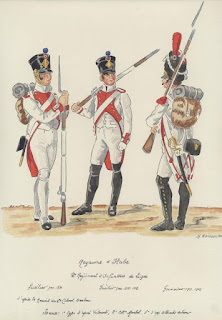 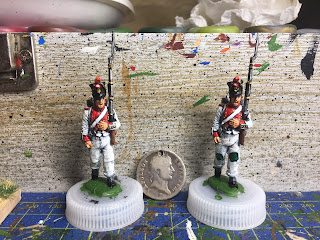 I also have the cuirassiers on order from Sash & Sabre along with a highland command pack, but these have yet to arrive from the US to Andy at Old Glory UK who will dispatch them to Spain. The Cuirassiers look excellent on the S&S website, can't wait to get my hands on them. Mine will be attired in drab brown coats and represent the 13th regiment in the Peninsular. 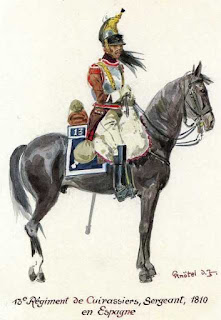 The above means that I could be facing a couple of weeks before I have more 40mm painting to do. What I am working on is the splitting of the second bases of all the infantry battalions so that they are able to form line with the command and colours in the centre. It's not something I'm enjoying as the 12 figure bases have to be soaked and the figures replaced onto 6 figure bases. I swore never to rebase these, but luckily when I based these I simply stuck the existing card bases onto sabot type bases so they do come off without much damage and just require the edges touched up with filler. Still a bit of a pain though but worth the effort and at least I only have to do one base per battalion.

The Dragoons featured in my last post now have bases finished and carbines added. I have noticed a slight difference in the red shade, the previous 8 figures appear to be lighter, I must have highlighted using more Amaranth in the mix. I'll probably correct this during the week and re varnish where required. 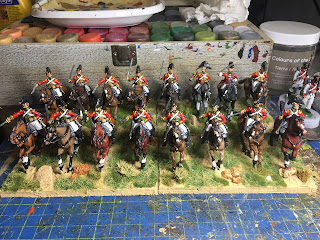 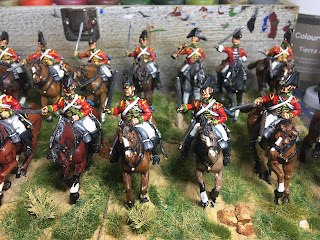 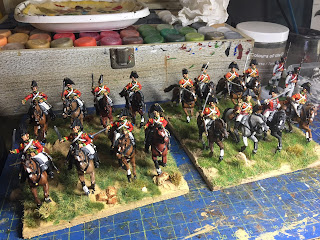 Finally for now, it is good that Perry offer alternative heads with each figure, but I seem to have accumulated a large collection of spares that are basically unusable. Each figures arrives in it's own little box with a choice of 4 heads and obviously you can only use one! This just seems a terrible waste of metal, given that every collector of 40mm Perry's will have the same issue so I can't even give them away. 40mm heads anybody? 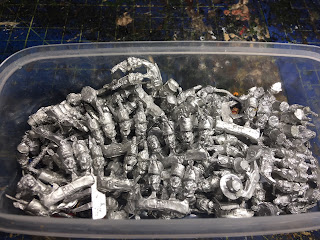 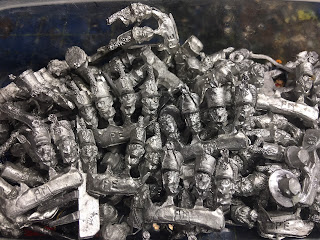