Had a good 10 days painting, 11 French infantry and 5 French artillery crew, not bad in 40mm I don't think. I'm now going straight into 6 British Heavy Dragoons to add to the two I have from the previous Dragoon unit. I am simply enjoying my painting so much at the moment.

Firstly I completed the seventh French battalion by adding 10 Perry figures to the existing 14 Sash & sabre figures, a few of which are wearing greatcoats. These were the last of the S&S French infantry I had and although the unit is a bit of a mish-mash of uniform styles they don't come together too badly. The Perry fusiliers are very rigid in pose and slightly more slender that S&S but I'm happy that they work well together. In this unit we also see a Perry eagle bearer and pioneer, the officer being a S&S with a very strong face.

A note re the flags. Currently these are generic printed flags and I do intend to replace them all with GMB flags in due course, and when I do so I will research to ensure all units represent those actually present in the Peninsular. 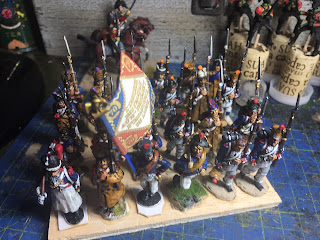 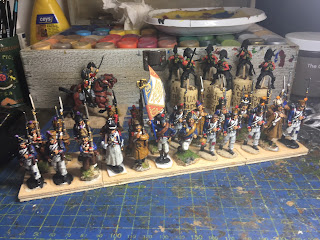 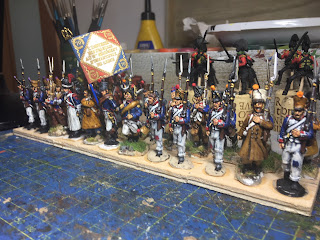 The S&S 5 man artillery crew arrived here in Spain only on Tuesday in my wifes hand luggage, and by Thursday they were painted and based alongside what must be at least a 12pdr gun, it is huge! It now sits alongside my other two French guns and looks most impressive. 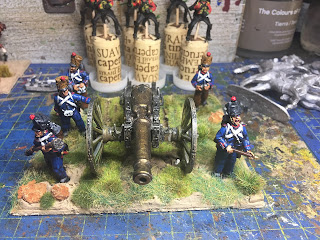 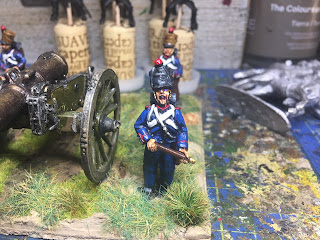 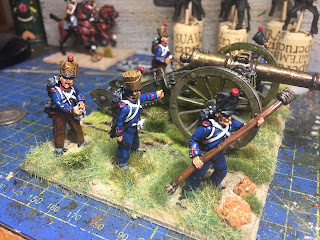 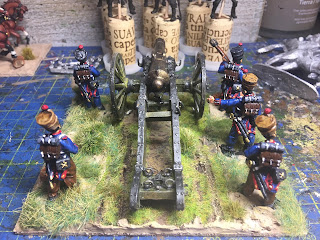 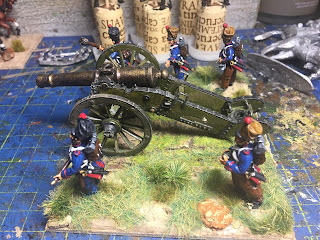 Also this week I have re jigged my French command bases. I was never really happy with the circular base with three mounted figures so removed them and added the Perry Drum Major you see below. One of the bases contains two mounted officers, the others a single mounted figure and foot figure. The British are getting the same treatment currently. 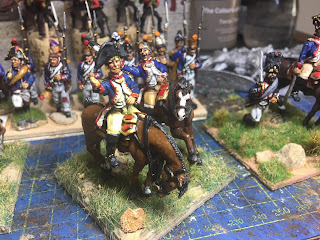 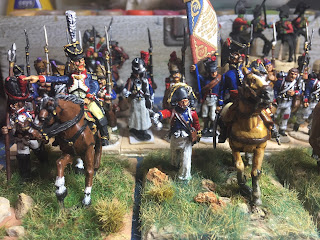 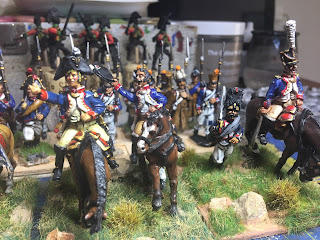 So currently on the painting desk are the British Heavies. Again carried back by my long suffering wife through Gatwick customs, but this time without a mention. These will bring my cavalry to 16 light and 16 heavy  dragoons. 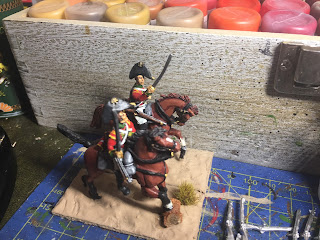 Now waiting for S&S Cuirassiers and Highland command. Bit of a landmark, I now have just over 500 painted figures in my collection. I'm very keen to get some terrain sorted, just trying to wait until we know exactly what we are doing and where we will be.
Posted by 'Lee. at 05:53