I removed the previous post as I was not happy with the content, just seemed too repetitive. This blog has always been about painting figures first and foremost, but I'm aware that showing too much of the same things over and again can get a bit boring for followers. The collection video went on Facebook's Napoleonic page and YouTube so that a wider audience can view it should they wish.

So, here we have the first 6 painted Spanish Guerrillas by Perry Miniatures, with 6 more on the way. I decided against using the monk figure on this base but I will probably add a base of Spanish monks at a later stage so he will get used. I went for quite bright shades on these, based on Goggled images and the  Spanish tradition of not holding back on colourful clothing!

I had a few Spanish gunners hanging about since I bought the start of the collection from Andy Copestake early last year, so decided they would make a useful irregular Spanish gun team, just a bit of fun really. The gun was also a spare, not sure where it came from, the carriage is a lot smaller than the Sash & Sabre British guns, but lets just assume it has been acquired by the Spaniards so they intend to use it. Bit of conversion work among the gunners, head swaps and the rammer/sponge needs finishing off with green stuff.

On the subject of artillery my RHA officers have still not yet arrived, I'll give to the end of the week (28 days) and if they still have not arrived I will have to ask Graham to print me 3 more and I'll pay the £10 tracked/recorded postage that generally gets stuff here in 4 days, worth it to me. Ian Smith and myself have been discussing the rest of the crew, 4 more digital sculpts at a cost of 280 Euros split between us. I think the plan may then be to make the crew available to others with any proceeds split between Ian, Graham C and myself as they will be unique in 40mm  scale and Andy Copestake, UK stockist of the sash & Sabre range does seem to be shifting a fair few of the Peninsular Napoleonic range.

On the painting desk now are 7 more French Voltiguers to be followed by the completion of French infantry regiment number 7 using Perry figures including a couple of characters, a sapper and drum major to add a touch more colour to the unit. 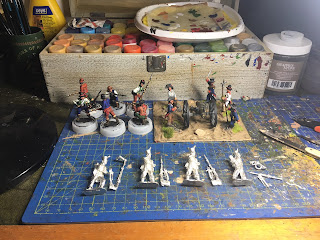 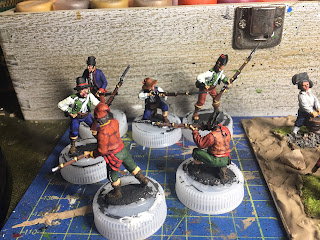 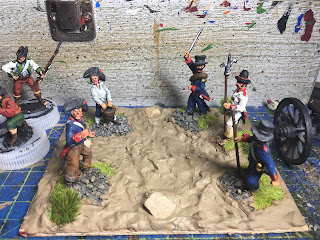 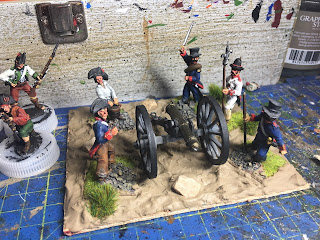 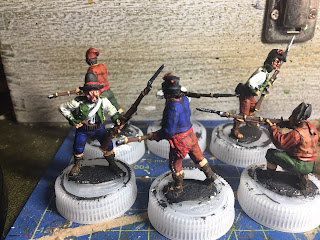 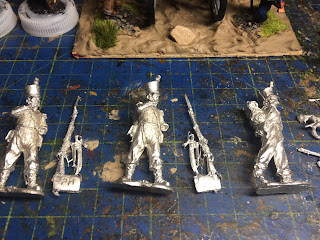 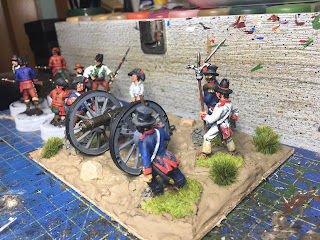