Right, so the Perry's are on the way and Andy now has my Sash & Sabre cuirassiers and Highlander command. The latter will be travelling out with Daughter number two and Grand daughters Lilly and Violet week after next and the Perry's could just take any time as usual. Packages seem to arrive in Spain within a few days and after that who knows where they go until they arrive at Ador Correos, still they get here eventually.

I'm using the time to work through all of my units in order to bring all of the bases up to a standard style and allowing all infantry units to form up in line with the command in the centre. It's been a little messy but it's done now. All the of the figures have also been given a thorough clean with a soft brush and warm water, they were quite dusty. Any of the original figures that were matt varnished have been given a coat of Vallejo satin after the clean up, which is now my standard varnish. The 60th Rifles were one such unit but the Satin sheen has really lifted them, although I know varnish is very much a matter of taste. 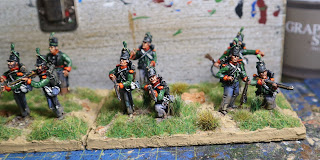 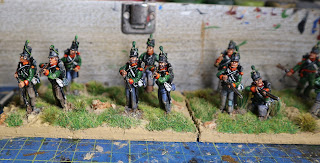 Having worked through the British I then did the French. The vast majority of the French were those I originally purchased from Andy early last year. With my additions of extra command groups etc they are actually the work of several painters, one being myself. The style does vary but I simply mixed them in all seven battalions and where shades of blue etc do differ with units I put that down to the ravages of the Peninsular weather, I like the overall appearance. Again I have tied in the bases, I know they are quite thick but need to be if I am to pick up or move what are very weighty figures.

Once everything is finished I plan a grand revue with them all gleaming!