Yesterday was a good day. I went down to the Correos in Ador to pick up an eBay package of paints, brushes and other bits and pieces and to my surprise was handed my recent Perry Miniatures order (7 days), and a package from Graham C containing the resin 3D printed RHA officers. I think this was day 30 and I had given up on them, in fact Graham had printed replacements for them only the evening before. From the postmark I could see that they had actually been in Spain for 3 weeks! So the Spanish postal system works, but only at it's own speed.

The resin prints are surprisingly good, I had concerns about how crisp the detail would be 'in the flesh' but have to say I'm really pleased. Once I got a nice flat black undercoat on two of them they looked even better and the fine detail seemed to jump out. I spent most of this morning painting them and the result is as good as I had hoped for when Ian persuaded me to go down the digital route.

Just need to check a couple of details, lace colour and buttons on the pelisse, but they are about finished. Just the gunners to go now, I think Graham may have the first gunner file now.

The third officer will command my long planned rocket battery using converted gunner figures and scratch built launcher once the two guns and crews are completed over the next few months. 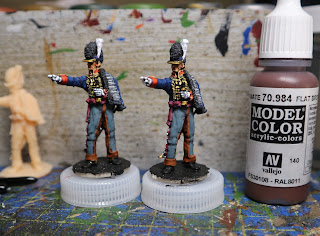 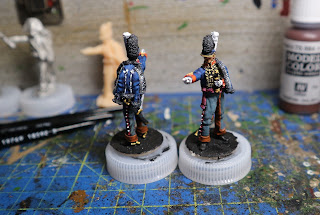 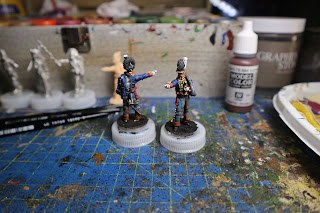 Edit: A couple more shots to show size comparison with a Sash & Sabre sergeant and a couple of unpainted Perry Miniatures. Just about spot on I'd say. These can of course now be printed in any scale, but in 40mm there are no RHA figures currently available. 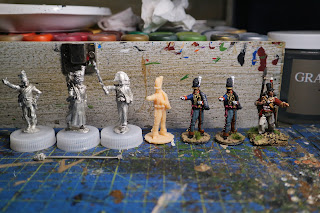 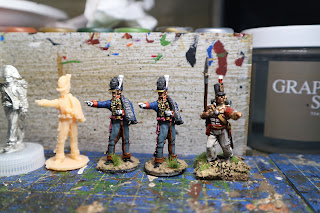 And more good news! I have managed to find some decent IPA here at last, it's a real treat for my taste buds and is sold in our local Supermercado in packs of 4 bottles for 4 euros 80 cents, 1.20 per bottle. I  keep them in the fridge and they go down a treat in this heat - 38 degrees today. Cheers. 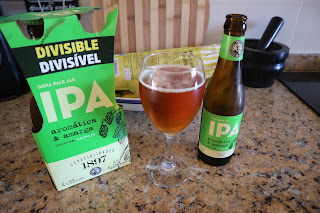