I'm home alone until Tuesday, when my wife returns from visiting the family. She will be bringing back another pack of Sash & Sash British Heavy Dragoon troopers and another French artillery crew, The heavy metal always creates a stir  at Gatwick customs, they seem to like the figures!

Yesterday the temps here in Valencia touched 42 degrees so I remained indoors and got a good bit of painting in. Took Poppy the dog out early but even then it was hot, and even at 8pm when we went out again it was still very warm, thank goodness for air conditioning is all I can say. I went up and turned it on at 10.30pm and when I went to bed at midnight the room was positively cold. During the day we just tend to use a large fan downstairs (until around 8pm when we use the aircon and close the patio doors), but my painting light showed 31 degrees yesterday and the paints were skinning over almost as soon as I put them on the wet palette, making it a bit of a struggle. I did however manage to finish these three Perry figures. The Eagle bearer and Sapper will be used on French unit number 7, whilst the drum major is going on a command base beside a mounted officer. I'm making up the numbers with the Perry fusiliers you can see in the picture, 8 of them and today plan is to paint the first 4 of them.

My wife has left me well provided for with home made meals in the freezer, 3 individual cottage pies, (because I love cottage pie), bolognese sauce (none of your jars here, fresh tomatoes), Chilli Con Carne, and lots of salad, my favourite being sliced tomatoes layered with mozzarella cheese, sliced spring onions (massive things here) and fresh basil, drizzled with olive oil in true Mediterranean style, I can knock this up in about 5 minutes, add a sliced boiled egg and slice of seedy wholemeal bread and Bingo. Of course red wine is stocked up for the week too, Shaz certainly looks after me on the supplies front! Last night I settled down to eat around 8.30pm, (the Spanish tend to eat very late and stay up late, 10pm dinner is not unusual here), and I watched Carry on up the Khyber, no doubt inspired by Bob Cordery's recent game at C.O.W. I must admit it had me laughing out loud. 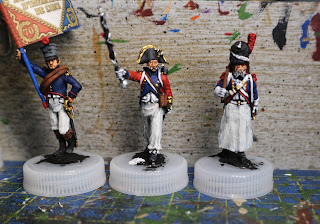 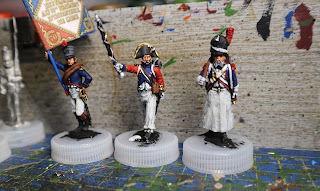 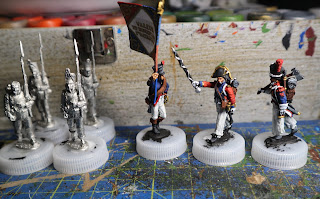