This week I managed to give the 4 plastic German half tracks bought very cheap on eBay a bit of a makeover by repainting them as captured vehicles as required by the 'Hammer and Sickle' list for Flames of War that I am working too. I'm not sure that all captured German vehicles would have been repainted in this way, but it would have been a simple and quick job and would avoid any confusion in the field. I had to strip the kits down by removing the tracks as they were badly positioned. A bit of filing, trimming and cleaning,plus the addition of a couple of missing front wheels resulted in an improved look. I gave them a basic green base coat followed by a wash of Vallejo black ink and then a fairly heavy 'rusting' to complete a heavy weathered look. They were then based in line with my entire FoW collection now approaching some 80 tanks and vehicles. Just need to place a few Soviet crew figures in there and add decals. I'm quite pleased how they turned out. 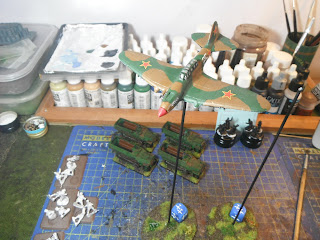 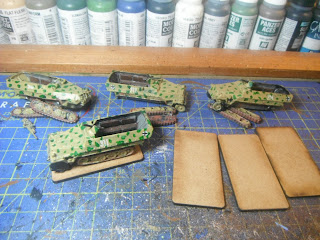 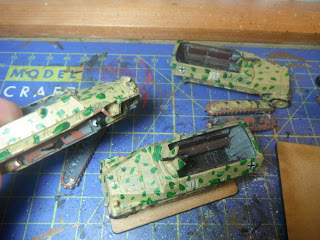 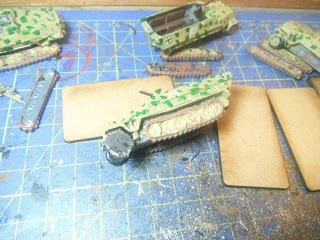 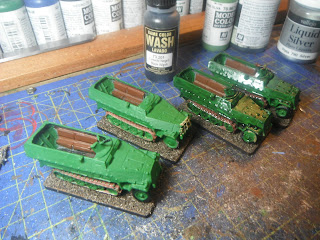 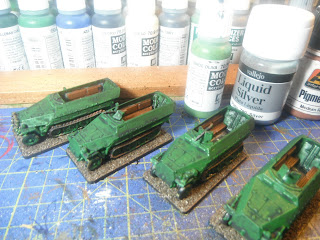 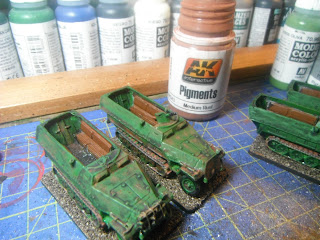 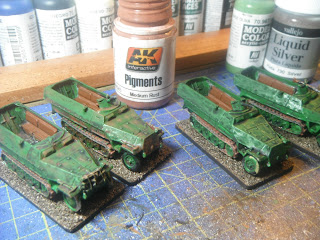 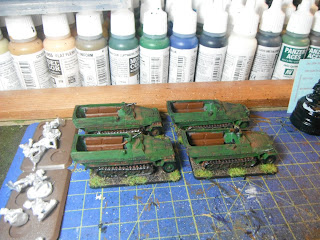 I'm a big fan of the aircraft models produced by Battlefront for FoW and currently have 4 painted with another 3 unpainted still in the boxes. I may well go on to acquire the entire collection of them. However, I wanted to try to make some taller flight stands so that the models would hover above the rooftops when placed on the table. I like the bases that come with the models, so wanted to keep the flight dice on the base. This natty blue dice is used to indicate the number of aircraft in the flight, you roll for this as part of the ground attack procedure and the  dice indicates 1, 2 or 3 aircraft. So I looked around for something suitable to make the extension from and remembered Steve the Wargamer's tip about cutting the bottoms off of used sparklers to keep as handy wire for modelling projects. I had already cut them off and kept them in my modelling drawer, and found they were perfect for the job! I superglued them to the bases, and after a bit of time wasted buggering about with rare earth magnets simply drilled a small hole into the bottom of each model so that they sat securely on top of the wire and are interchangeable. I made two stands and textured them, job done. 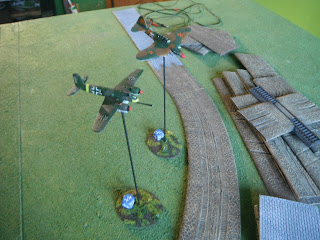 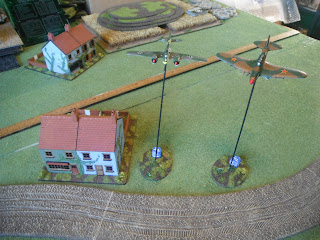 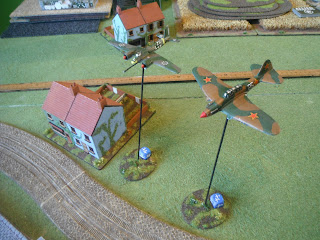 I can't imagine how much time I have spent over the years making roads for wargaming, and I know that I have spent a small fortune buying pre made products, mostly from MDF that just did not cut the mustard for me. Remember the days when all roads were cut from card or made from strips of cloth etc? As I want to make my Flames of War set up as scenic and adaptable as possible I decided to invest in the road sections made my Battlefront as part of the FoW range, especially after seeing them in use on the Mad Tin Hatter blog (see right), I  ordered the Rural Roads pack, Rural Roads Extension pack and the Cobbled Road pack, I have another Rural Roads pack on order. To say that am pleased with the products would be an understatement, they are some of the best that I have seen and to my surprise they are made of rubber, I had been expecting resin. The tank tracks are most realistic, and all integrate in a convincing manner, for example the expansion pack contains a section where the tracked road gradually becomes a cobbled section. A railway crossing and track section is also included in the expansion pack which of course means I will have to order the Rail Track pack next!  Designed for 15mm scale I would highly recommend the products. 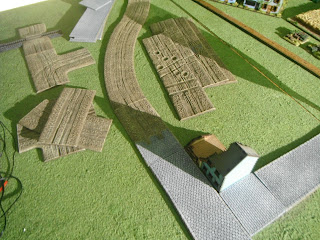 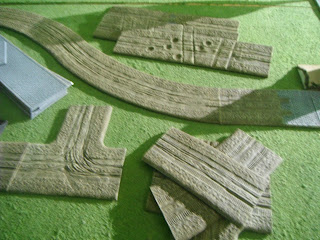 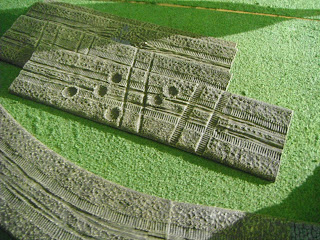 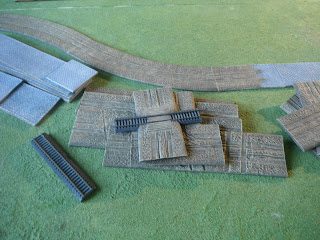 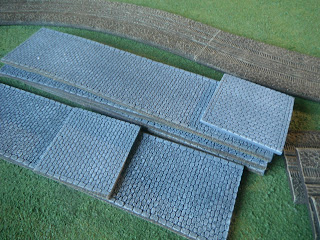 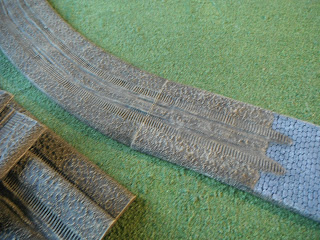 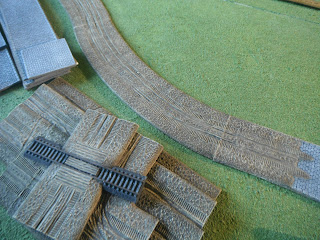 Finally, the table up in my waragme room is undersized, 5 x 4 and in order to use the Space Saver TSS terrain tiles that I bought several months back I needed to order a couple of 2' x 1' tiles. This gives me the option of leaving the 5 x 4 table permanently set up, or use a full 6 x 4 downstairs in the dining room. I decided to order 4 of the half size tiles along with a selection of the hill packs made to match the Space saver basic tiles. This will provide me with plenty of options, for example I could go 8 x 4 or 5 x 6 and have extensive hills. I await delivery of these with much anticipation.

Of course this additional spending and commitment to Flames of War must be budgeted and to this end I am seriously considering selling off all of my Bolt Action collection, it's done nothing but sit in boxes for months and I would rather see it being regularly used. More on this in due course, but I would like in the first instance to see the entire collection go together before I break it up for eBay sales. I'm thinking in the region of £800.00 for everything I have here Bolt Action related, that includes German, US & Soviet forces, all of the terrain items (£100.00 worth of MDF buildings alone!), all of the 'Armies of' books, 2nd Edition rule book, order dice etc. I'm going to produce full lists of everything as a next post, but I would consider it to be very good value given the price of Warlord Games products. To follow.