Thanks to Mel The Terrain Tutor for this great idea (check out his YouTube channel HERE), these are my explosion markers for 15mm scale, simply made from clump foliage. I had considered buying the resin version via eBay, but the 25mm base was just too big to sit on my 15mm scale tank models.

A dig through my old coin box found lots of small coins suitable for bases, around 10mm that would sit on top of a turret or hull of a knocked out tank. I already had a load of clump foliage rescued from my attempt at making bocage before I replaced it with a commercial product from S&A Scenics so I simply selected some bits that looked to me most 'explosion/ billowing smoke' like. I superglued them to the coin bases then took the lot down to my undercoating shed at the bottom of the garden and gave them a thorough soaking with Army Painter Matt black. They took an age to dry and a couple of coats, but when I went back down to get them I was very impressed with how realistic they looked (to my eyes at least).

Had another watch of Mel's video before painting them and basically copied his method of starting with a fairly dry brush of yellow, then mixing to orange and finally red. The billowing smoke was then drybrushed with grey and Hey Presto .... finished. I might need to do something with the bases, I have the option of touching up the black or removing them to leave the markers freestanding, not sure yet.

Much better than using cotton wool or synthetic fill I'd say, you can see the effect on the T34 in the pic below, explosion has blown off the turret leaving a fiery plume of smoke. Next up a spot of 15mm gardening as I work on a few Arcane Scenery houses and backyards. 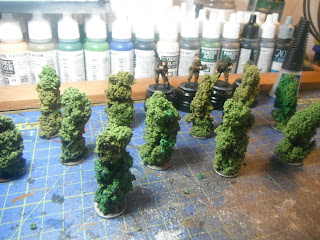 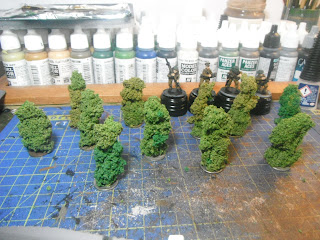 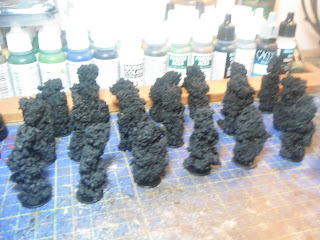 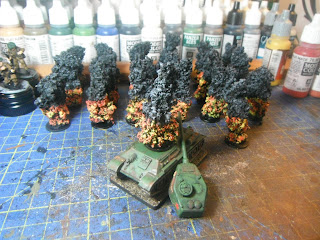