Bergepanther and King Tiger for Flames of war.

I finally found time to paint the Peter Pig Bergepanther recovery vehicle. It's a hefty model once assembled, and I found it made a nice change from painting the more standard model tanks. I added a Peter Pig command figure plus a couple of spare wheels in the top. Next order to PP I will get the crew set that goes with this model to complete it, I'm also awaiting decals via eBay. Recovery vehicles do have a role to play in FoW such as dragging tanks that are stuck or bogged back out. My only slight gripe here is that the model does not feature side skirts to protect the upper tracks, OK I guess for a non combat vehicle, but it does leave an annoying gap showing between tracks and hull. 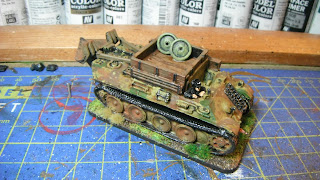 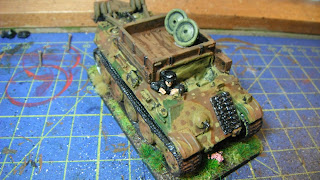 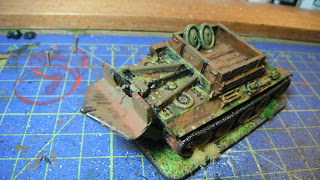 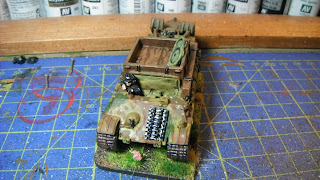 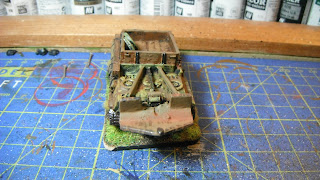 The 2 'King Tigers' were purchased via eBay at a bargain price and arrived with a flat coat of matt sand. I'm pretty sure that they are Forged in Battle models from the resin bases. A touch of cammo followed by a wash of Sepia ink to blend things together, tracks painted and upper detail added improved the look. I also fitted rare earth magnets to the hull and turret to steady the heavy turrets with their massive 88mm guns as they were a bit wobbly! Again I'm waiting for decals to arrive to finish them off and will add the hull machine guns from pins. As I already have a platoon of 3 Tiger 1's I had not intended to add the Tiger 2 because they are just too powerful on the table top and nothing can stand against them, but I seem to have become an enthusiastic model tank collector, the 15mm collection having grown to in excess of 70 models German, Soviet & US.

Compare the Flames of War stats of the King Tiger to those of a Mk V Sherman!

The massive frontal armour was sloped to deflect shots, a lesson learned from the encounters with the T34's during the Russian campaign. 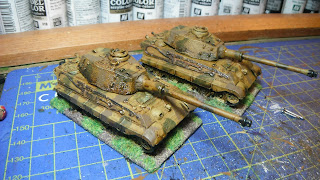 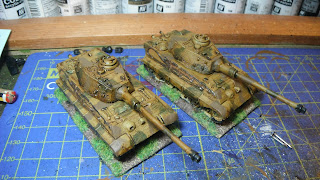