This last week has been focused upon Flames of war. I had been meaning to get around to painting the Peter Pig tank riders for ages. so they got a black undercoat and a fairly quick paint job picking out the colours, a bit tricky as each casting is 3 figures hunched together behind the turret of a T34. I added 2 'strips' to each tank in one of my platoons of 6 models. My Soviet tank platoons each consist of 4 T34/76's - one of which is the command tank - plus 2 T34/85's upgraded. I have 3 such platoons totalling 18 tanks.

The models are all 'Battlefront' resin and metal kits. Aside from looking good on the tabletop these chaps have a role to play in Flames of War, protecting the tanks from enemy infantry. Page 200 - 201 in the 'Specialists' section of the rule book tells us that these 'escorts' cannot be targeted when on the tanks, firing must go to the tank itself, but when a tank is destroyed the riders are lost with it. The riders can fire independently of the tank whilst still perched upon the back at a ROF of 1 with no penalty for the tanks movement, but of course cannot damage armour only enemy infantry. They should prove to be a useful addition especially where those pesky tank hunters are lurking about. 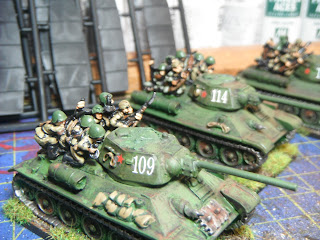 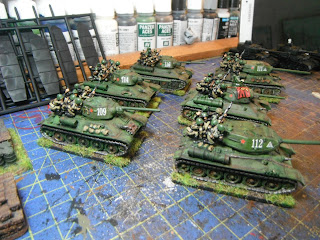 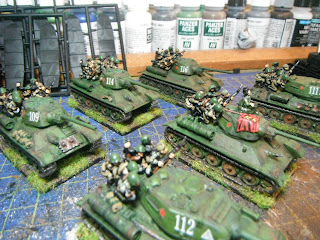 While I have the Russians out I'm going to strip off the horrid hairy static grass from the infantry bases and replace it with the short strand grass for consistency. I have a pack of Forged in Battle mortar teams to add too at some point.

I also managed to finish off a 4 base German mortar support platoon plus command base. These are Forged in Battle with additional Peter Pig figures in late war zeltbahns (cammo smocks). I'm pleased with how these turned out and the FiB & PP figures go together very well. While I'm in a Flames of war frame of mind I'm going to get on with some more German armour as I have a box of  Panthers and a box of StuG assault guns that have been here for ages. I'll start with just 3 of the Panthers (5 per box), they really are fine little models as you can see from the undercoat picture below. Again, all are spray primed with Army Painter matt black whilst still on the sprues before assembly, the plastic cement simply melts away the paint at contact and I have never had an issue doing this. The 'shurtzen' side armour will be be painted on the sprues and fitted once the models are painted. 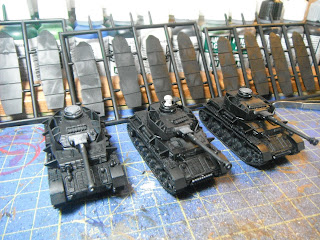 I hope to get some terrain work in along the line, I'm keen to have a go at using cork bark to create rock faces on my hills as illustrated by 'The Terrain Tutor', what than man can do with a bag of cork bark is simply amazing! 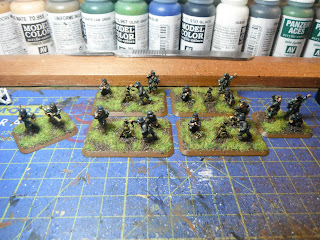 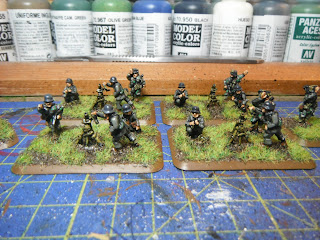 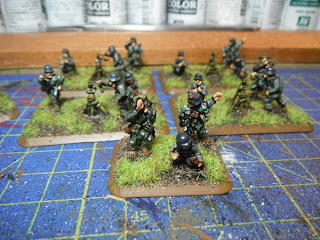 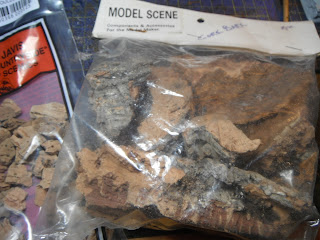