Half tracks and more Panzers!

This last week has been spent finishing off four Forged in Battle half tracks and three Battlefront late war Panzer IV's (model H - in my previous post I mistakenly described them as Panthers). I like the FIB resin models a lot, probably prefer them to Battlefront now.

The half tracks will provide transports for the hard pressed German Grenadiers and the Panzer IV's with their stand off additional armour will add another platoon to my tank collection. The 5mm thick 'Schurzen' was found to be effective in reducing the penetrative ability of armour piercing shot as well as proving protection from enemy tank hunters. As the box of 5 models included 10 sets of Schurzen I decided to paint up extras for an existing platoon of 4 earlier model Panzer IV's only to discover that they could not be fitted as they do not have the support bars, so that was a bit of a waste of time! I still have 2 more of the MK IV's to build plus a box of 5 StuG's, but I'm taking a break from kits now to re focus back onto terrain for a while.

As I was lucky enough to win the 'Mad Tin Hatter' competition for a £20.00 gift voucher ( I never win anything normally!), I will use it to provide some seated figures for the half tracks, and I have requested that the voucher be for Peter Pig figures. Thank you James.

My Russian list requires the addition of 4 captured German half tracks to transport the infantry platoon so when I saw 4 such on eBay at a cheap price I grabbed them. As you can see from the pics they require a bit of restoration, a couple of front wheels are missing and they look as though they were thrown together. The paint job is interesting to say the least, but they will be repainted in green anyway so that's fine. Not sure of make, but they are plastic.

Going to do I bit of work on my 15mm houses next, completing the back yards and wall sections etc. I'm also starting on adding cork bark rock faces to my hills in order to make them a bit more realistic, and knock up around 20 or so explosion markers from clump foliage, sounds mad but they really do work! These are to be placed on knocked out tanks and look far better than cotton wool etc.

Few pictures, back soon with those explosion markers. 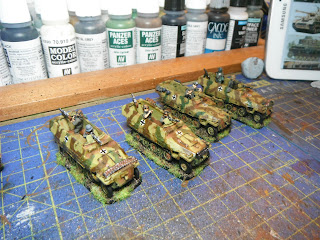 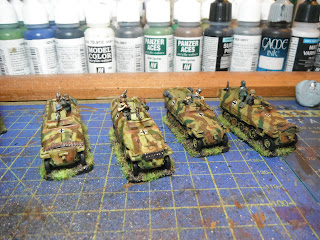 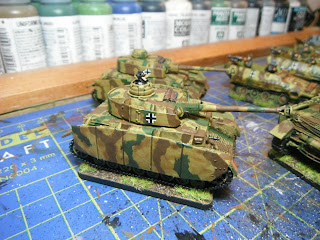 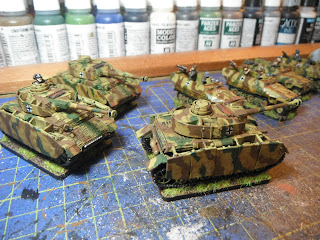