There has been something of a dip in enthusiasm for painting recently, I think as a result of reaching the end of my Bolt Action project and being unsure of what I want to do next. Domestic life is also busy with the imminent arrival of our second Granddaughter, and getting the house sorted out has seen me painting and wallpapering to freshen things up and a few other jobs that needed doing.

However, I have been working on more 15mm tanks, mostly Germans now including three Tigers and more Panzer IV's. I'm using a simple cammo pattern over the base coat of Vallejo 'Middlestone' followed by a thinned coat of Sepia ink that seems to bring it all together. Tracks are then painted together with any other metallic parts, and then I use the rust pigment sparingly as a final touch. All models are now based to match the Forged in Battle bases and flocked in a dark earth followed by static grass. I'm not rushing it as I'm rather 'tanked out' at the moment! 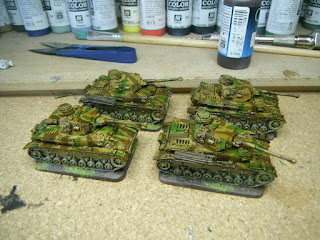 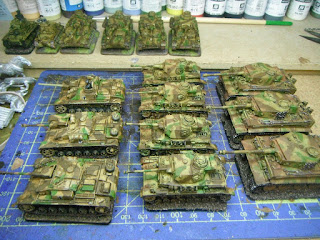 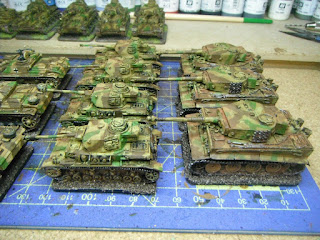 I decided to paint something for my display shelf that is a bit of a change from WW2 and as I have had the lovely Warlord' Boudicea Triumphant' chariot set sitting here for several months I thought it would make a nice change to paint it next. It's all cleaned up ready for undercoating, very little to do beyond removing those casting worms, and you can what a finely detailed model it is. I particularly like the Boudicea model with her flowing hair, and hopefully it will turn out to be a nice piece and inspire me to get back painting again. The box artwork is beautiful. 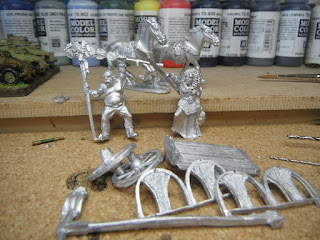 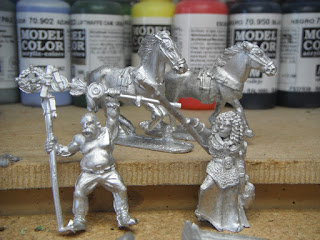 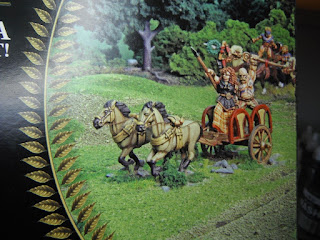 Another thing I have done this week has been to play a Commands & Colors Napoleonic battle, just with the blocks as supplied and I really enjoyed picking up the rules again. It's surprising how much of the rules I retain in the old brainbox and I was able to have a game with little reference to the booklet, using the extensive playsheets provided. For those not familiar with this game it's a hex based card driven simulation of Napoleonic warfare and the great thing is for me at least that you can set up a battle based on one of hundreds of published scenarios quite quickly and play to a conclusion in around an hour or so once you have a good grasp of the rules. I still enjoy playing and the attractive artwork on the stickers ( lost count of hours spent stickering blocks from the base set and four expansions but it's been worth it), gives it the feel of playing a proper wargame. To complete the collection I have ordered expansion 5 'Marshals, Generals & Tacticians' which introduces some new mechanics into the rules based around command and control and introduces a set of fifty 'Tactician' cards into the game. I'm looking forward to seeing how this integrates with the base rules.