In an attempt to give the 'Bolt Action' side project a bit of a push I decided to paint the next six German Grenadiers. I had mentioned previously how difficult I had found the process of sticking these figures together, really not how I would choose to spend my hobby time, but once done they look OK. However, the US infantry were a nightmare to put together, unlike the German sprues these even have individual arms that require the separate weapons to be glued on, and getting everything to line up correctly really tested my patience! Not just small and fiddly, but getting the guns to sit in the hands correctly seems almost impossible to me. Even ammo pouches and belts etc need to be stuck on to the US troops, and you have to ensure it's the correct belt for the weapon, so for example if you give a guy a Browning Automatic Rifle then you also have to stick on the BAR ammo pouches etc. Of course individual weapons are identified in Bolt Action so you need to build balanced squads.

Having finally managed to get the first 10 US troops stuck together it left little enthusiasm to paint the damn things! However, I found a bottle of US Olive Drab surface primer so thought I would try a faster approach to painting this batch, more to follow on that.

My 28mm StuG is now also under construction, and what a fine model it is going to be, I'm holding off until I get my new airbrush later this month, and once I'm confident with it I'll paint both the StuG and the half track I have here. It will prove very useful for camo patterns.

Talking of camo, I invested in the correct shades for the splinter pattern (Splittermuster), and must say that it is far easier than trying to match these shades. I'll be using these on my planned platoon of 15mm Flames of War veteran panzergrenadiers, many of whom are wearing the camo Zeltbahn. These will be all Peter Pig figures and I again decided to try a different approach my undercoating in German Field Grey. This will be followed with a 'Magic wash' and then detail painted as normal. 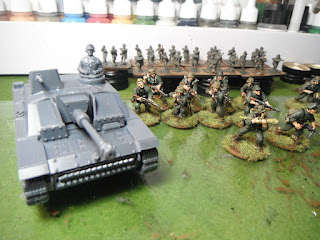