I had been planning to play a small game of Flames of War in order to see how familiar I am with the rules off the playsheets. Keeping things simple I went with the 'fair fight' mission with both sides deploying onto the table. In accordance with the 'Mission' rules I diced for table edges and attacker/defender, the Germans winning and choosing what side of the table to attack from. I played with just three platoons for the Allies, these being two troops of British Shermans including two of the up gunned Firefly version (all confident trained), plus a platoon of US airborne (fearless veterans). I added the support from the Typhoon (Limited Air support), as I was keen to integrate the air support rules into my game for the first time.

I'm pretty comfortable with the tank and infantry rules on the whole and found no need to consult the full rule book, just a couple of things I kept in mind to double check later.I won't do a full report as I was mostly focused on playing the rules with as few errors as possible, but I took pics at various stages as the main road through the village gradually became blocked with abandoned or blown up tanks of both sides. I really enjoyed the freedom to move where I like after playing hex games for so long, it takes some getting used to! You have to keep thinking a move ahead, given the generous move distances things can suddenly swing around as tanks become vulnerable to flanking shots etc. I got most of the main features in the game, bailed out tanks, start of one move I rolled to remount three bailed StuGs but failed on all three, I think that was the turning point as it enabled the more lightly armoured Shermans to close in and shoot them. The veteran US airborne were hard to hit as intended, and once in concealment and gone to ground almost impossible to dig out. I brought up the German half track (1ic) to try to put some heavy machine gun fire into them, got one hit, but it was saved. All in all a good game for a solo run through, the US airborne moved to take one of the objectives to win the game. The PAK 40's were extremely effective against the British tanks blowing up two of them on the first shots. I brought in an air strike by the Typhoon and despite being deployed on the edge of the woods scored a rocket hit which was ....... saved. All good fun and certainly given me the motivation to keep going with Flames of War.

Pictures not great as I was concentrating on the game. I'm pleased with the overall look of the terrain, as much of it has been built from scratch. The surface is the excellent 'Mat O War' as reviewed here. On the agenda is more hedge/bocage sections and more woods, plus some 'dug in' markers. I also have a couple of Panzer VI's on order. 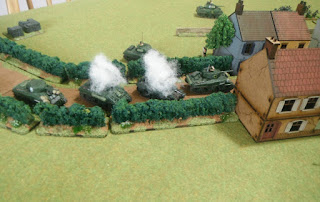 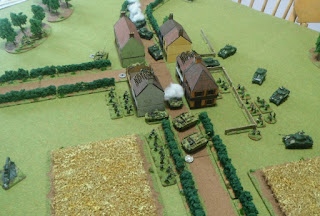 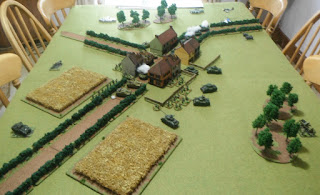