... and back down again for Flames of War.

It's great to able to play both sets of rules as and when I want to. Having completed a run through of BA I set up a small tank battle for FoW. I'm getting a feel for the rules now and really enjoy pushing tank platoons around the tabletop. I tried a few different models to see how different anti tank values and armour saves work and interact. I only realised yesterday that a Sherman V with it's anti tank of 10 cannot penetrate the front armour of a Tiger 1E in this game, quite rightly so, the Tigers front armour of 9 means that even on a save throw of 1 the very worse it can do is to bail it out on a firepower check. Turn that around however and the Tigers anti tank of 13 against the Shermans front armour of 6 means that it can't stop the shot on a D6 roll, it's a straight firepower check, 3up to blow it up , otherwise the crew bail out.  The 17pdr Firefly Sherman is more of a match, but the same armour rating means it remains vulnerable. Evening things up a bit with smaller German Panzers give the Sherman a more even chance. The initial 'to hit' throws are very straightforward, the main factor being the skill rating of the target, Veterans being much harder to hit (4plus) as they have more skill in avoiding fire and using cover etc. but with only half a dozen factors to remember it' very easy to commit to memory. The M10's got a run out, and did destroy a Tiger through it's front armour.

Artillery rules got a first run through, a German battery of 4 howitzers. Rules seemed fair enough if followed through in stages, you have nominate the spotter, then from memory you get three attempts to range in and each failed attempt raise the 'to hit' score by 1. No restriction on how you place the template it seems, and you roll to hit anything under it. The 4 gun battery template is 6" square, but I have seen some HUGE Russian battery templates that appear to be a foot long! Not done a bombardment yet.

'Dug in' markers, only received these yesterday and delighted with them as I had not realised they came ready painted, better than a card token for sure. I'm going to order another pack.

Yet more pics of games in progress, I'm getting there and have a potential opponent lined up so I want to get a good grip of the rules first myself. 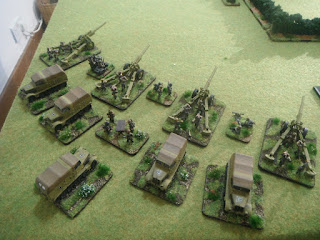 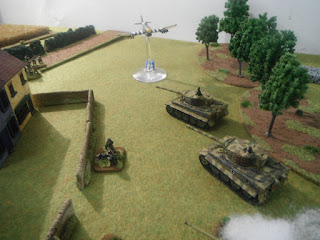 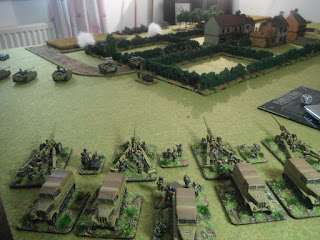