As I am due to begin painting some 6mm ACW's in the New Year for a new customer - he is planning both armies for Gettysburg under the recent 'Altar of Freedom' rules - I decided to do my usual test paint in order to get a better idea of timings/ price per strip etc. The figures will be of course Baccus 6mm and the units are roughly 24 figures plus the odd skirmishers here and there. I duly sprayed up 14 strips of Union infantry first. I have tried numerous ways of painting 6mm figures but I always come back to the flat black undercoat and colours picked out fast but accurately, with no washes used to shade - I let the undercoat give depth to the figures which I think you need in this scale.

A quick run through of order of colours used is included below. I based the figures up on the standard 30mm x 60mm bases used in AOF and indeed Polemos ACW. For those who have not seen AOF here is a link.  http://www.6mmacw.com/

My 6mm painting method - as used on the Napoleonics in the Gallery - relies on swift but accurate touches of paint that must go exactly where I want them to! This means for example when painting in the basic blue coats I need to take care not to hit the crossbelts, bag, cartridge box etc, as I generally don't use a black after the undercoat. There is no dragging of the brush across raised areas in this method. I'll give a quick run through as I said above. Note that I'm still using the method of using my thumb to guide the tip of the brush exactly where I want it. I described this method some time ago here and have continued to work on it until it becomes almost second nature. You can find it here. (Link).

OK, I set the clock running and were off!

Firstly I have selected Vallejo Royal Blue for the coats. This may appear slightly light in the bottle but for 6mm Yankees it gives a good finish and covers well. I use only the tip of the brush and reload frequently - both arms, dot around the belts front and back and a fine slash along the collar.

Now Foundry Sky blue light - quickly but accurately paint the trousers, take care not to touch anything else, I want to keep any corrections to a minimum. Also a dot on the canteen covers, could be other shades of darker blue or even uncovered tin, but the lighter blue adds contrast.

Flesh is next - Vallejo Sunny skintone is perfect. I carefully touch the hands first and then paint the faces. It makes a huge difference to the finished look of 6mm figures if you avoid blobbing in the face but rather make a couple of accurate strokes - first touch the nose then a stroke down both cheeks .... done! Keep the brush moist so it flows just where you want it.

Brown is Citadel Mournfang (Base) my favourite brown and again selected for coverage even on a fine stroke. - muskets, hair, drumsticks etc.

White - Vallejo white, slightly thinned for whats to follow - the canteen straps. Keep the thumb resting for accuracy, just dip the very tip of the brush and fast clean strokes along the back and front, taking care to keep the lines very fine or they really do spoil the look. Add lines to drum etc.

Vallejo gunmetal along the musket barrel fronts, take Vallejo Gold and carefully touch the belt buckles and I like to touch the tiny breast plate on the crossbelts.

And essentially they are done, just 6 colours used. Adding flags in this scale requires practice and a steady hand..... I managed to chop off the eagle on one flagpole .... blast! To add the 4 flags takes around 10 minutes and they are ready to base. I always brush the PVA over the entire base before carefully siting each strip in the glue, cut the skirmishers down to individuals and place along the front edge. Now I cover everything in the Baccus basing stone and leave to dry. Then use the Foundation wash to soak the base, leave to dry and then add static grass, leaving areas of stone showing which can be dry brushed at will. Again this method is fast but gives pleasing results.

The results are as shown below which represents approx 2.5 hours start to finish excluding drying time.

Next up I'll be doing 2 Confederate units as a test paint.

Hope some of you find the above helpful in tackling 6mm ACW figures. 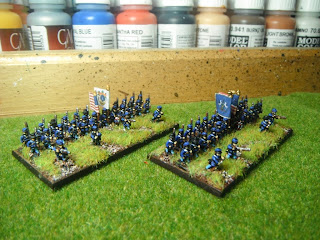 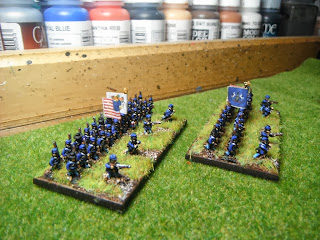 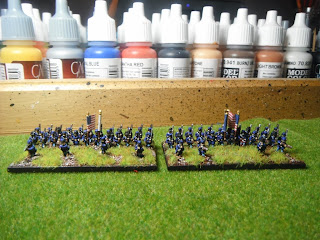 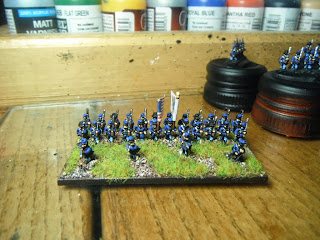 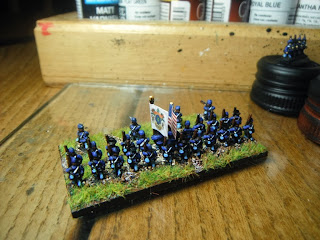 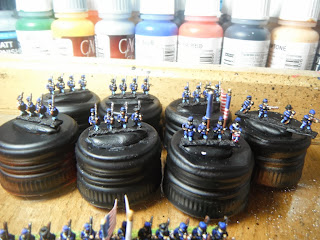