Ups and downs, a funny old week that was!

Having cleared the decks with the 18mm's shipping off to Australia and the 40mm's gradually making their way to Graham C their new owner, plus John's box finished and packed for posting I find myself in that curious state of mind that the freedom to cast around for something fresh brings. Of course safely shipping hundreds of fragile figures always brings a certain amount of anxiety, especially where one suffers from it anyway. On Monday the large box went off to Australia via Parcelforce Global Priority, it contains 4 strong inner boxes with the bases individually wrapped in bubble wrap and is now on it's way.

Impressed with the Parcelforce home pick up service we went with their 24 hour delivery service for the first box of 40mm's. Now this was a substantial package at 9.8 kg's with all the figure bases glued down to the bottom of the box with PVA and then packed out with enough bubble wrap to destroy the planet (it will be recycled), topped with polystyrene sheets. I attached a Fragile sticker and felt confident that it would be absolutely fine. Next day I was horrified to hear from Graham C that the box had been severely damaged in transit with one end torn open and the figures basically a jumbled mess. Several heads had come off and four were missing from the box, in addition some of the horses were bent over and riders unseated. I can only imagine that the box had been either dropped or given a kick underneath to do that much damage. Luckily it looks as though everything was restorable, muskets bent back straight and I have spare French heads to replace those lost. Graham said the horses took the worst of the damage but he was able to straighten them and bend back into position. It will require a bit of repair work and TLC but we will sort it out together. By the time I received the news I had already dispatched a second large package containing two inner boxes using the same service. This one arrived yesterday, still a bit of damage but not as bad luckily, A few heads off, some Spanish infantry off their bases and damage to the rocket battery base with a couple of the resin figures broken at the ankles. I really do not understand what Parcelforce does with them, again it had a fragile sticker on but clearly no care was taken. We have one more large consignment to go next week, but I'll be changing the packing style internally and using UPS instead, I'm taking no chances and that's the last time I use Parcelforce.

On a slightly brighter note a couple of the EPIC sprues arrived this week. This was my first close up look at these figures and for me the jury is still out on them. Clearly they are very well designed, very detailed and in accurate shoulder to shoulder pose with the majority of muskets corrected shouldered on the right. I wasted little time in getting 6 of the strips undercoated in black and later picked out a few jackets and trousers in Flat Earth, my go to base shade for 'Butternut' uniforms. I think it was at this point that it struck me that even a 3 base unit is going to take a LOT of painting compared with say a standard 24 figure 15mm unit. Given that the demands of painting these little figures are no different from standard 15mm's in terms of detail the investment in time of producing a 60 figure unit will be about the same as for example painting 3 x 24 figure Peter Pig regiments, I really don't think there would be much in it as given the way these are cast it is quite tricky to accurately pick out colours where the figures slightly overlap. I'm going to try to get some more paint on them today and see how things go, but I have to say at this stage I'm still undecided.

I did return to painting the Eureka British infantry and have finished off the first section, half the second section, and the redeploying PIAT team, and should finish off the second half today long with them Vickers MG team. Despite what I said previously I could not resist ordering some Germans, so 3 x 10 figure infantry squads along with support weapons and command figures are on their way for the simple reason that I do really enjoy painting these sculpts.

As I said, a funny old week of ups and downs but hopefully things will settle down a bit more this week. 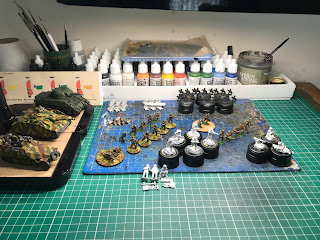 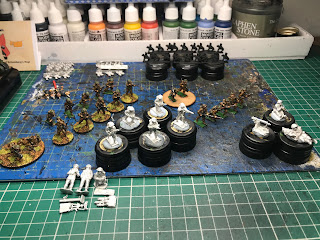 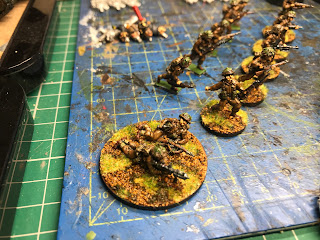 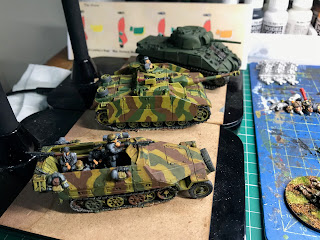 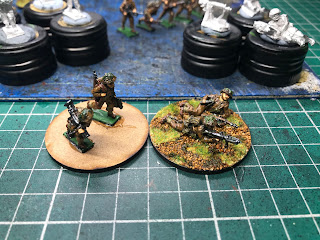 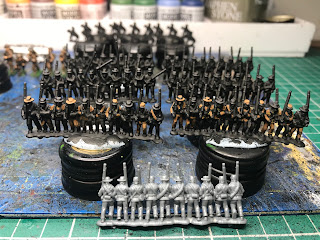 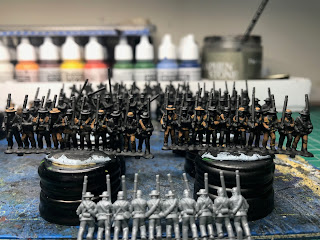 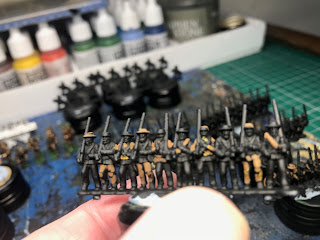