A quick update. By this evening I will have completed 3 Union Regiments, two guns and a mounted general, so with the same number of rebs that's a grand total of 360 infantry plus 4 guns and crews in 2 weeks, not a bad start to the project. One issue will be painting the same sprues over and over again as I take it further. That said Kallistra are indeed a perfect match for these having seen painted units with Kallistra command. I might well place an order for some of their cavalry both mounted and dismounted to ring the changes.

I have cut down all of the hats to kepis on the Union troops, the topper used is identical to the kepi top so they look pretty convincing I think. So far no chopped muskets and all fingers still intact. I decided to go with printed flags from the Warflag site as I wanted them slightly bigger than those supplied and I'm happy with the  results so far.

The visual impact of 60 figure units is quite pleasing when you stand back at arms length I must say. I'm going to have to come up with some kind of unit identifier as they all look the same! I'm thinking maybe  a neat printed label to the rear of each command base, just the name and maybe paper strength on each and then record losses on a good old fashioned roster sheet to avoid tabletop clutter. I'm going to try the set of rules that Steve-The-Wargamer suggested based on the OHW rules but fleshed out a bit more and see how I get on soon as I get a few more units painted.

Images show state of play as of this morning with just the 3 more strips to cut down the hats, base coat and paint hopefully today. 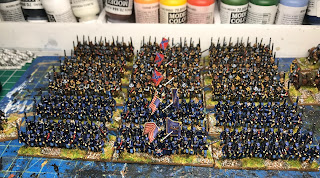 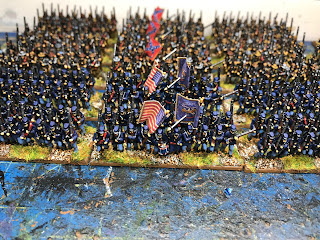 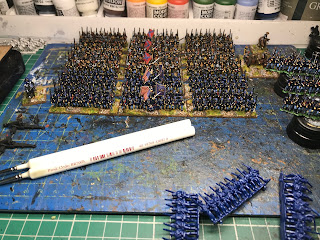