Painting the Epic ACW's #2 - some timings and highlights!

OK, so I have now painted 5 strips plus a mounted commander, Brigadier General D. Crook will command a 4 regiment brigade of seasoned men and is known for his tough fighting and hard drinking and has a certain reputation among the fine ladies of Virginia.

Like many others I think these work best with 3 bases per unit, a healthy looking 60 figures representing a regiment. One video that did tempt me was that linked below where the two outer bases had the figures moved slightly inwards to form a more continuous line, although the downside is a somewhat out of formation column. At the moment I'm sticking with the regular basing though.

Yesterday I painted 4 strips and put a timer on applying the 2 basic shades of Flat Earth and London Grey. It took just under two hours to do this, but included a break for a sandwich and cup of tea of maybe 10 minutes. Bearing in mind that I generally paint with the TV on so glancing back and forth as I go. Yesterday was a couple of episodes of The Commander starring Amanda Burton - yes, I'm a fan of her work :)

So the first image was taken at that point. In the evening I went back and finished them off in a round an hour, including this time adding highlights and varnishing. The highlights I used were Japanese WW2 uniform for the 'butternut' and Light Grey again applied at speed and only where it could be seen. I think this has made a big difference?

I added a flag from warflag and decided to trim down the second flag bearer to a musket as having two flags in the front of a Reb unit just did not sit right with me. As my epic box arrived yesterday - and what a box of joy it is - I may replace it with the better quality flag supplied.

Today I'm going to paint another 2 strips to complete regiment number 2 plus a couple of the artillery bases. Tomorrow I'm out for my first Covid jab so will have to see how I feel afterwards but I think I may do a couple of UNion regiments next which I think will paint faster but I do intend to trim down some of those hats to kepis so we shall see.

Phots show the first 3 bases with added highlights, they look far better at 13.5mm than as they appear here looking more like 28mm figures!

Above: the result of a couple of hours work.

Above: Flag and highlights added. 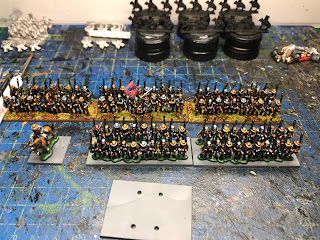 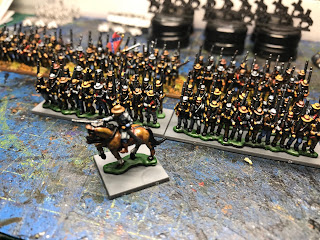 Above: Brigadier General Crook on a bloody great horse! 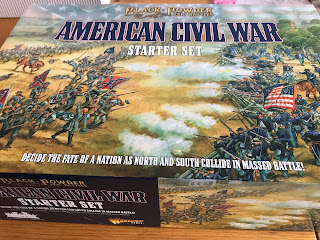 Above: Appearing everywhere it seems is the obligatory big  box shot!
Below: video link showing the bases closed up to the centre and trimmed down hats, well worth a watch.
https://www.youtube.com/watch?v=oSPmJseBgTs&t=252s
Posted by 'Lee. at 02:07