It's an enjoyable time for me with a fresh start looming. I have decided that as much as I like the AB 20mm WW2 figures I'm not going to go any further with them, I'll probably paint the rest of what I have and eBay them, probably get my metal cost back. Main reasons I think are that I did Bolt Action to death a few years back, and the cost of the AB's at £1.30p each is right at the top end of metal soldiers, more than most 28mm ranges even. I do understand that they are top quality but they are just not doing it for me. 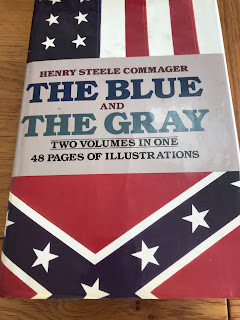 As the release date for the Warlord Games Epic ACW approaches I am increasingly drawn to them, and having cancelled my pre ordered epic bundle due to disappointment at the single sprue to represent both sides, I decided to take another look and this has resulted in my ordering the £90.00 starter set which contains no less than 2400 figures! Thoughts of one day returning to my favourite period again have long been in the back of my mind, but I knew that it had to be something fresh and would present an enjoyable painting challenge without being prohibitively expensive or time consuming. The video linked below sold it for me finally and I just can't wait to get my hands on the figures now. The more I see the sprues the more I can see the huge potential and the one thing that bothered me most (the lack of kepis on the Union sprue) has been resolved by the guy in the video who has simply shaved down the hats with a sharp blade, exactly what I plan to do. As a former re enactor of the ACW I could go on and nit pick uniform and equipment details, but at this scale I can certainly live with that. I do like the way this guy has also replaced the officer with a mounted commander too as it gives the command base more impact.

As always I really don't know where this project will go or end up, but in the back of my mind for probably years now has been a return to the original brigade level Fire & Fury rules which I know were not perfect, but for me was probably one of the very few sets of rules that ever brought the period alive as a game, and I must have played almost every set over the years up to around 1990 or so. I can see 8 to 12 of these bases having real visual impact as a brigade.

Finally I have to mention the price of these little figures at less than 4p each, I mean who can seriously argue with that?

Didn't manage to get my hands on one of the freebie sprues and I see they are going for around a tenner each on eBay, but the release date is not far off now anyway.