Don't worry dear readers I'm not going to keep banging on about these new ACW figures, I promise things will settle down! Clearly they have captured my imagination, (a rare thing these days). With 3 Reb regiments painted I decided to have a first crack at trimming down those hats to kepis for the first Union unit. I used a scalpel blade for this taking care not to cut off any rifles which would effectively mean binning the entire strip. By no means perfect but once base coated the job is not too bad I think, especially at true scale as seem by eye. I'm far happier than just painting them  with all those hats.

With all 3 Reb units now fully based I think the overall look is something I'm pretty happy with. I gave the artillery a little extra work, basically inking over the carriage and attempting to turn the barrel into a smoothbore brass effect, again they look not too shabby I think?

I'm going to retain this as a background project, the time/reward ratio is sufficient to keep even my attention span interested, something about these just works for me and I think it's a lot to do with the strip painting and slot in basing. I'll be painting some Peter Pig 15mm ACW's for Graham alongside which will get the more usual individual approach as well as more for Old John (20mm Ottomans of the early 18th Century).

Tomorrow the last box of 40mm Napoleonics goes off to Graham, and having recovered from the shock of the first delivery via Parcelforce ( the second was not too bad at least), we are going with UPS for this and the packing method has been totally upgraded. Surely at 9.5 kg's this one cannot be thrown around at least! A few Fusiliers lost their heads so I painted some spares to replace them.

My aim for the week ahead is to paint the 3 WSS cavalry units for Gerry (6mm) complete 3 of the Union Epic units for myself and that's about it really. 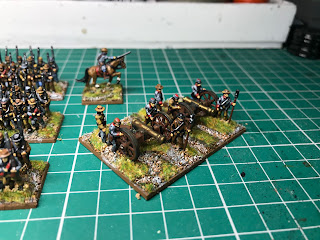 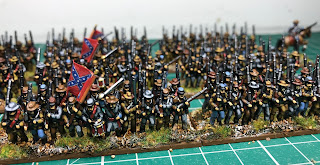 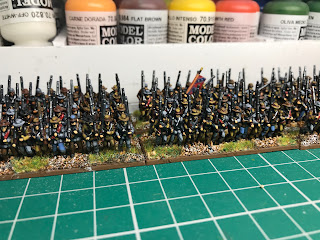 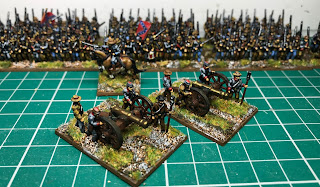 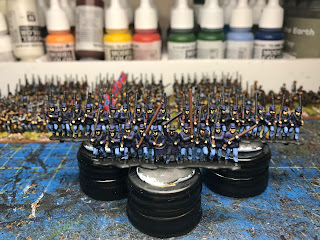 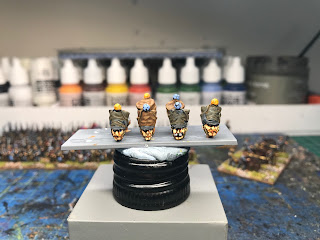 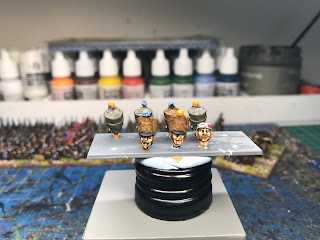