I'm home alone again for a few days as Shaz is back in the Uk until Wednesday for our youngest Grandaughters 1st birthday. It's a nice sunny Sunday morning here in Spain, with predicted temps into the low 20's for today and the coming week after what has been a very wet couple of weeks.

I thought that a review of the 15mm Blue Moon Napoleonics might be in order as I have pretty much completed phase 1 in the C&C figure per block project. It's all gone to plan nicely, I'm happy with the paint job, the heavy satin varnish and the basing. I'm going to get them all on the board today to play through a game based on a scenario from One Hour Wargames. For this game I will be using standard C&C battle rules but will replace the cards with a simple dice activation system. This will negate the need for left/centre/right sectors and allow me to play a free movement game using the basic C&C rules. I'm also going to trial a blind draw activation system (Bolt Action style) rather than the usual 'I go, you go' game. Basically it's as follows:

Green (French) & Grey (British) dice go into a bag, one per unit. I'll change this to Red and Blue dice if this works out. Blind draw to see who activates.

Leaders always activate themselves, and any elite unit (Guards etc) may also automatically activate,
activation may be from any sector, that is from across the board.

Infantry units may form square as usual, but those classed as 'militia'- meaning in this case lower quality troops- will make a dice roll to see if they fail to do so due to lack of training and drill. A roll of 4,5,6 required to do so.

So it is possible for a commander to get a run of activations when the dice are drawn from the bag, meaning the action can swing back and forth unpredictably when playing solo. With equal numbers of dice in the bag, things will even out during the course of a game.

That's about it for now as far as rules go, after that it's standard Commands & Colours movement, firing, melee and morale/retreat rules. I will write up this test game to see how things play out.

Beyond the above these is the potential to use Tony's 'Ramekin' ideas, which are more thought out than my own simple tweak and contains some excellent rules for control and command, but more on this in due course.

Getting back to the title of this blog post, here are some pictures of the 15mm's so far. As said previously I am absolutely loving painting these Blue Moons. I have no desire to expand them into larger units, but it has occurred to me that a custom made board with slightly larger hexes would allow me to use some nice terrain items rather than the printed card hexes that have an annoying habit of sliding about the board. I was thinking this over last week in Amsterdam, being away from the figures the concept of creating a stand alone board, neatly framed that sits comfortably on my dining table came to mind once again. The standard C&C hexes are 55mm, and I think a slight increase to 75mm would work for me. With this in mind I looked around for some buildings to represent BUA's and the Battlescale 10mm resin casts were perfect in size and scale when used with my 15mm figures.

The Battlescale (click to visit) range is sculpted by Steve Clay whom I seem to have known for years now. He works in 6mm and 10mm scale currently but is slowly expanding into 20mm. The 10mm scale buildings are just large enough to work with 15mm figures, the sculpts are really crisp and clean with individual planking applied and each roof tile painstakingly applied as individual tiles! There was not a single air bubble to be found on my order and no chipped or broken pieces, every piece is a little work of art and a true labour of love. I hope to get mine painted over the next week or so and will feature them again once completed, but meantime I can highly recommend this range of buildings and accessories.

Time for some more Pictures, the Line Lancers were painted and finished in a day (yesterday) and this time I went for a slightly stronger highlight on the horses, I'm quite pleased with the result under the satin varnish. 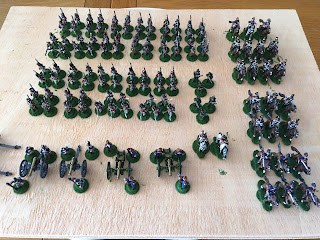 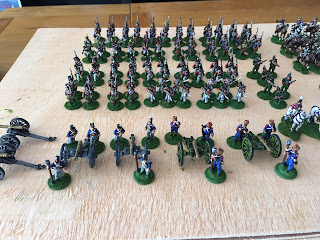 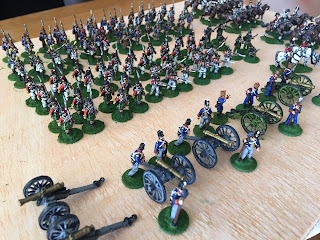 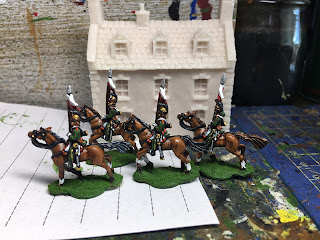 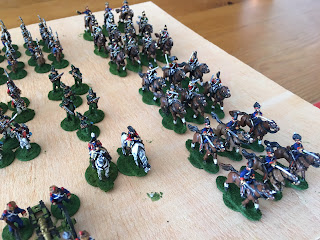 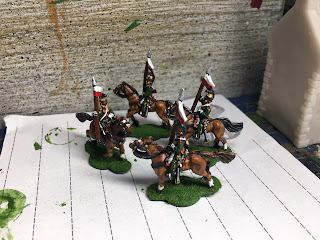 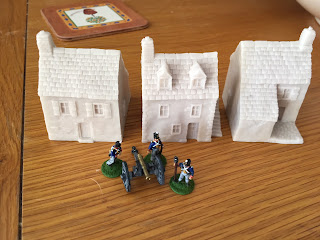 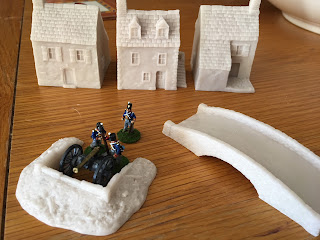 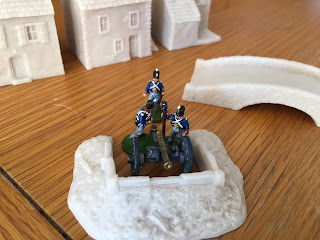