Recently on the tabletop wargamers Facebook page the administrator posted a message basically saying that his page was for those who painted and wargamed with miniatures, not boardgames or paper soldiers! He got quite a backlash and quite a few members left the site. I took great pleasure in posting a couple of images of my 15mm figures on the Command & Colors board asking him where he thought I stood with that? He said it was definitely a wargame, as did several others, which was odd because I regard it as a boardgame played with shiny soldiers. Anyway, enough of that to do, it's time to play through the first test game on the C&C board.

I placed everything I have so far on the board, a random deployment on the first two rows of hexes, the terrain simply consisting of a large central town, (2 Victory medals per hex held), plus a few hills and woods. Standing back and looking at it felt extremely satisfying, having completed this stage in what seems like no time at all.

I'm going to play through this today using the rule tweaks described in the previous post. The coloured dice are in a plastic cup, I gave them a good shake and then blind drew the first dice for first activation, it was British and a roll of 2 gave me the minimum 2 activations. I advanced both the British light infantry units, one towards the town the other towards the woods. In C&C these are 5 block units as opposed to standard 4 block infantry units and can move 2 hexes and still battle. I then moved one of the generals to attach to the unit advancing on the town which will give a morale bonus should they be on the receiving end of a flag retreat roll. The dice is placed at the rear of the board and the next is ready to draw. I should add I used 9 dice per side and once all are pulled I will return them to the cup.

More to follow. I'm going to return to painting some 40mm's now (more Chasseurs) as this will give me my wargame fix as I do so, but I'll keep adding more 'blocks' here and there. 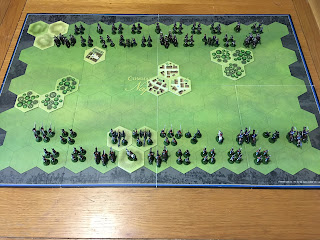 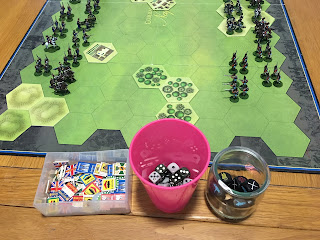 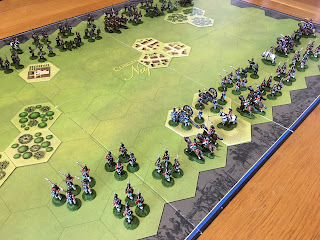 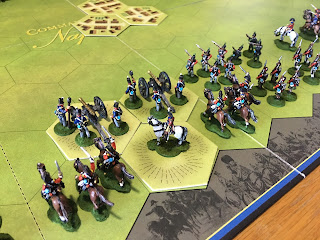 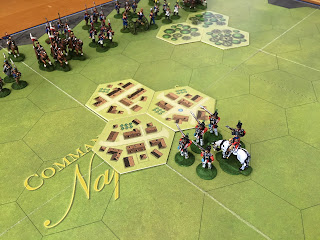