Not so super - glue!

You guessed it, this is another one of those posts lamenting the results of a session trying to stick model soldiers together. I wanted a break from infantry so selected 4 of the 40mm Sash and Sabre British Light Dragoons as this weeks painting job, and as they come in several parts as you see below I bought a tube of Superglue from the local hardware shop for use on them. 'Gel' it said on the pack, and  I usually have more success with the gel, so I pierced the cap and prepared for a short relaxed session that turned into a bit of a sticky nightmare.

I started by attempting to stick the torsos to the legs, nice thing is that you can set them at slightly different angles, forwards, leaning back or turned to the side. I quickly realised that what ran from the tube was anything but gel and within less than a minute I had a pair of troopers legs firmly stuck to my finger that needed to be pulled off leaving my finger rock hard with glue. I then tried to attach the legs using my tweezers but that resulted in a torso glued to them that also had to be carefully removed. Refusing to abandoning the session - as I probably should have done at that point - I persevered, and eventually got the job done, although attaching the carbines to the slings was a bugger of a final challenge. The end result was worth it, once I had spent several minutes scrubbing the hardened glue off my fingers. What did surprise me was that when I undercoated them some time later some of the glue must have still not been set resulting in a ruined (luckily old) paint brush. 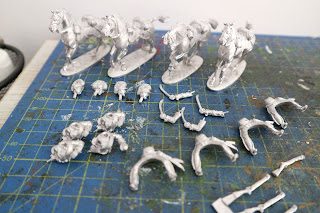 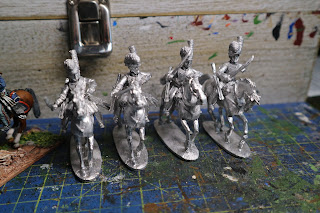 All in all it was a frustrating session, but I felt lucky to end up with no damage to the detail of the figures. I'm now looking out for a better quality gel superglue. Next question for me was how best to paint these mounted figures, given that I always generally prefer to paint cavalry with the troopers glued on now days. I have often found when sticking painted riders to mounts that scratch damage can occur that then needs to be touched, so I'm going with my 'one piece casting' method again and the result is as you see below, ready to get started on.

Photos show the undercoated dragoons with the single painted trooper that came with the lot I purchased from Andy. Wonderful paint job, I only hope that I can achieve something close to this.

All figures 40mm by Sash & Sabre USA, available in the UK via Andy of Old Glory. 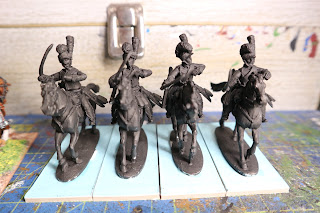 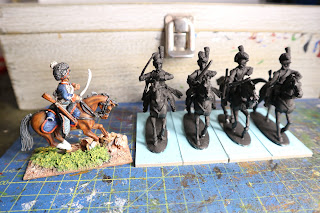 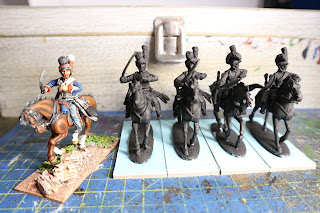