Kilt patterns (again), and The Rain in Spain!

The 92nd Highlanders continue to grow in strength with 24 figures now painted. I'm going to add 4 of the flank company figures from the pack of 5 that I have here and a planned mounted officer wearing the bonnet to complete them at 29 figures in total. A large unit in 40mm scale, but as discussed previously can be drawn off and fielded in smaller units if required, for example companies of 8 for Sharp Practice.

Of the current 24 figures only 12 have been painted by myself, you can tell these from the black/brown bases. I found the initial 4 a bit of a challenge to be honest, being started in the rented villa where I really was not in the mood to paint, something I find is very important. Now things have settled down and I'm in my own home with my familiar things around me I'm finding myself increasingly back in the old mood again and feel the need to spend more time painting and for longer sessions. It has taken a little time to get my eye 'back in' and I think this shown in the painting of these 12 Highlanders, with only the last 4 being of a standard I find up to scratch. Once the flank company figures are finished the entire unit will get another run through during which I hope to pull everything together, touching up, matching up and generally bringing the unit together. For example some of my faces I am not happy with, some of the original 12 figures have yellow lace which should be white, my original 4 figures have very messy lace, whilst my latter 8 have much crisper lace, all such things will be corrected before I can consider them finished. And then there remains the question of the kilts ..........

The 92nd Highlanders wore a very distinctive tartan and the background shade was predominantly blue not green as on my Highlanders. I think the overall pattern is pretty well done though with the olive green lines and squares and the yellow central spots, but I know that I wont be happy with them until the main shade is more blue, so how best to go about achieving this without a total repaint job? I have been looking at a few interpretations of the 92nd tartan and now have a pretty clear idea of how I want mine to look, and the best way I think I can do this without a total repaint is to carefully paint in blue squares between the existing olive green checks. You see below a couple of 'test paints' for this to see how it works. 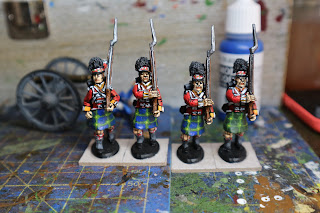 Following which, being satisfied with the general impression ( for such it is ), I went through the entire battalion and even gave the officer some tartan trews as opposed to the blue grey overalls he was wearing. I may have to bring the two standard bearers into line now, but for now all looks much better to my eye. I touched up the yellow lace with white and then gave all of the coats a lighten up with a mix of flat red and orange on the highlights. I could have used scarlet for this but prefer the more Gilder like highlights with the orange. Some faces continue to bother me! 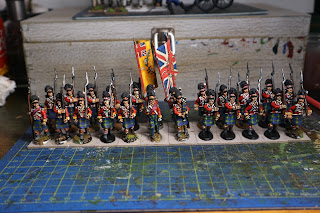 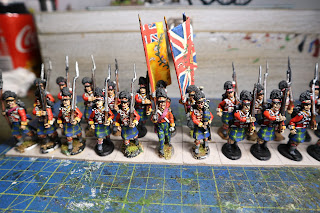 The 5th Foot are now on the production line, coats have been highlighted as above, cross belts brightened up and facings all repainted green so far. Lace needs a tidy up next and the faces require attention. I will add 2 standard bearers, a drummer and a mounted officer once they arrive. 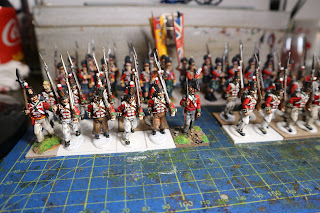 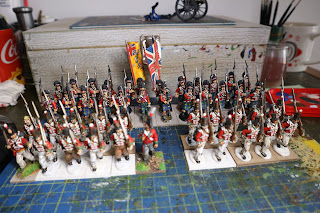 My wife and I have just about unpacked all the boxes that arrived from the UK and the garage area is almost clear again and ready for my wargame table. I have been giving this a lot of thought and I'm about ready to get started down there. It has been unseasonably hot here recently, even for Spain with temperatures nudging 39 degrees during the day, so I have been waiting for things to cool down a little. A couple of nights ago a wild fire broke out in the La Safor mountains and we could clearly see the orange glow and within an hour or so the air was thick with smoke, quite worrying. Next morning it was under control with  helicopters carrying huge bags of water slung beneath them flying back and forth most of the day. Today it's back to a more manageable 29 degrees and it's been raining all morning, only the third time we have seen rain in four months! I have been looking at the colours of the landscape here with a view to painting the table surface and there is a distinctive rust red and cream shade that prevails - although I'm not sure how this compares with further West and into Portugal as yet. THis picture shows the earth and rock colours at the end of our small back garden, taken this morning in the rain. Sometimes I almost expect to see Rifleman Harris up there! 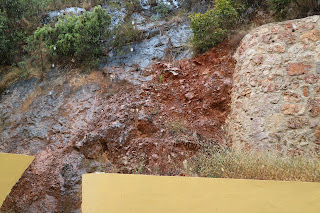 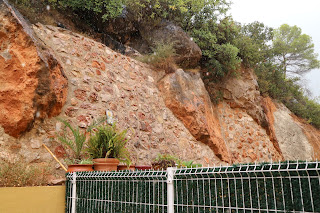