I have long had a thing about the early British Light Dragoons in those lovely Tarleton helmets. I'm planning a full unit of 16 of these figures, but for the time being will paint just 8, to include an officer and trumpeter. It only just occurred to me that I had given no thought to which regiment I want these to represent, I simply followed the single painted example that came with the collection, but I will do a bit of research before I paint the command figures.

These 4 were painted over 4 sessions and three days, I found them quite an enjoyable challenge. In 40mm scale the detail is quite well defined so one needs to be careful not to over-paint the lace for example, and a fairly dry brush is required to achieve this to avoid blocking in the lace and straps etc. The cuff lace was the final challenge for me, having messed it up by trying to paint tiny white loops I opted for painting in small circles of white and when dry spotting in the blue in the centre, this gave far more convincing results. I kept the faces simple and in my own style, avoiding the clown like faces of some of my Highlanders (which were subsequently toned down!). They took a lot of work in terms of hours spent on them, but I'm confident they will sit proudly beside the rest of my 40mm figures once fully completed, varnished and based. 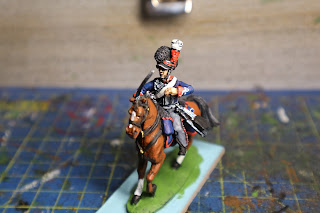 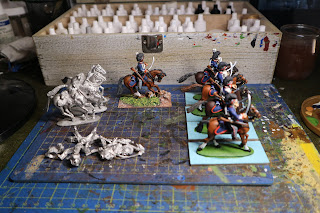 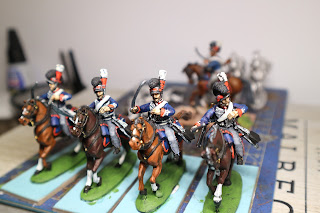 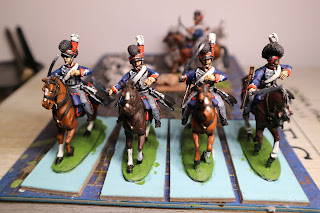 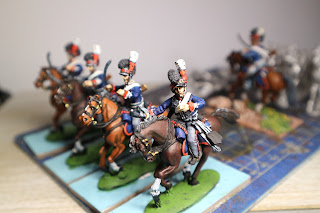 I have some ideas now on how I want to build my table, one decision is that given the fragility (and indeed cost) of these large figures a textured surface is out, the less handling they take the better and I want to be able to slide them around via the bases. That said I don't want a flat shade of green either, so some kind of painted surface with variation in shade is the way I'm going. What I have in mind initially is a very subtle grid, 6" squares - inspired by Ross of course - for the simple rules I want to use. My brief to myself at this stage is to try to produce a gridded table that looks like a conventional table, and I have numerous ideas of which more later.