At last, some painted figures!

I can't describe how good it feels to be back painting some figures again after what has probably been my longest break for 30 odd years! We left the UK in April and only now do I feel settled enough to paint soldiers, sitting at the old desk with my familiar box of paints and my modelling tools in the drawer. I have had to buy a new lamp, and after much searching I found this one in a large B&Q type store in Gandia, the wonderfully named 'Leroy Merlin'. Beside the usual household goodies I found they have a sheet wood cutting service and I mentally priced up a 5' x 6' table, which is surprisingly cheap, certainly a lot cheaper than the equivalent in the UK. Whilst some estimate the overall cost of living in Spain to be about 50% of that in the Uk, some goods are certainly more expensive, and the all singing all dancing lamp came in at 80 Euros. I like the fact that it can be switched between 3 modes of lighting, a bright white, a 'yellow' and - my favourite - a 6500 blue or 'daylight' and I'm using the latter to paint under and the white for photography. Besides this it has a USB port for charging the phone as well as displaying date, time and room temperature, which displays a very comfortable 23 degrees with the air conditioning running on a low setting, not bad considering it's averaging 32 outside at the moment.

I have finished off the 4 Highland infantry I started back in May and the next 4 are undercoated. I tried to match Andys painting as best I could and I'm actually very pleased how they turned out. The current 16 Highlanders will be bought up to strength of 24 foot and a mounted Colonel using a spare bonnet head. After much head scratching I have decided to set myself a basic 'phase 1' for this collection, the basing being flexible enough for a couple of sets of rules I have in mind, one being Sharp Practice and the other using full size units. Phase 1 will comprise 4 infantry battalions per side, the British being 24 to 28 figures plus mounted officers, and the French being slightly larger at 36 figures each, this is simply to use the number of painted figures that I have here. In addition each side will have 2 squadrons of cavalry, each of 8 figures, plus 2 guns and crews. This is basically as they will sit on the display shelves, but like I say can be used in any combination and unit size that I fancy, be they companies, battalions or indeed brigades as discussed in previous posts.

Beside 8 more Highlanders to complete I'm also working on finishing off 20 of the 'blocked in' British infantry, these will form the 5th Regiment of Foot with green facings. They are actually pretty good, just requiring me to repaint the facings and give them a general touch up and tidy up. My next order from Andy contains more command packs so I will add 2 standard bearers and a drummer plus a mounted officer to finish them.

Finally for now, we are planning a day in Valencia hopefully next week where I hope to source some Vallejo paints and some new brushes from one of the three shops listed as stockists on the Vallejo website. It will be a bit of a novelty actually going into a store again to buy modelling materials but it's not so easy to buy stuff online here. In order to obtain a mailbox here one has to go to the local Town Hall (of course!) and request a box and key from them. It was not too difficult to be fair, back to Ador, a bit more paperwork and the key was ceremoniously handed over so we now have our own mailbox. Apparently, if you have a parcel to be delivered you get a ticket in the mailbox and need to go to the Post Office - which is of course attached to the Town Hall in Ador - to collect it. That's life in Spain! 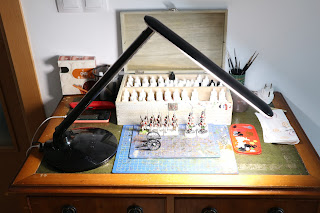 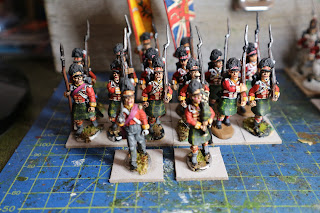