Happy New Year to my readers, Let's hope that 2017 brings a more peaceful time, and that we witness far less of the mindless violence of 2016. Sadly, I doubt it, but we can live in hope.

I managed to squeeze in a bit of painting over the festive period, to be honest it offers an escape for me from the excesses of eating, drinking and the general upheaval of family life at this time of year, the noise has subsided and things are getting back to normal. As you can see below my eldest Son in Law did me proud once again in the beer department, we drank our way through one box of the Great British Ales already, and started the second. The Hobgoblin Gold is a particular favourite of mine but I'm saving it for a couple of weeks when I hope to have a couple of beer drinking friends round to help me with it, I have found in the past that it loses condition quite quickly once opened, and it needs to be done justice in prime condition. 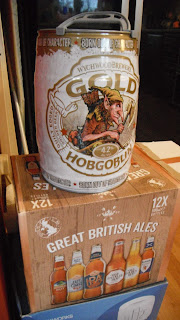 I painted the US HQ objective marker and added the 2nd Armored Division flag with it's 'Hell on Wheels' symbol, this adds a final piece to my US army. I also painted a platoon of Hitler Youth bristling with panzerfausts ( Battlefront metal figures). I was watching a couple of videos whilst painting them, and felt appalled at the losses suffered by these children (many were 15 or under, some as young as 12), during the final weeks and days in Berlin. At a time when many experienced regular
soldiers were surrendering,  the indoctrination was such that these boys were prepared to fight to the last and lay down their lives. Still, FoW is just a game and I enjoyed painting them, the red armbands as cast on gave a little lift to the somewhat bland colour scheme. Next up is a platoon of Soviet Katyusha multiple rocket launchers, resin models with metal figures. Very nice castings, I almost trimmed off what I thought was flash from two of the rockets before I realised they were actually arms supporting the weight and the figures go together in pairs! 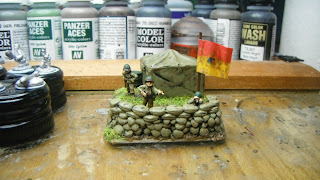 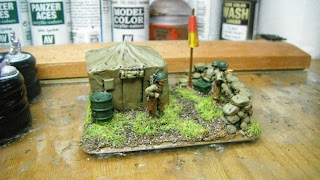 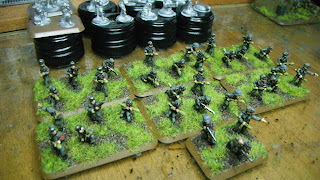 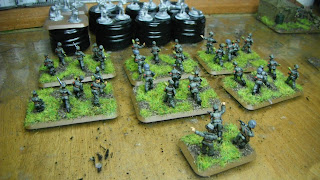 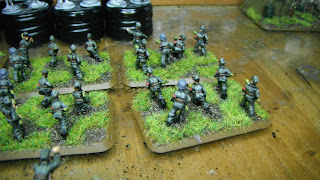 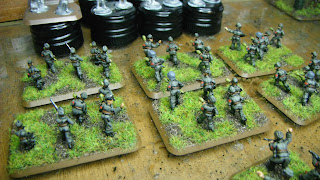 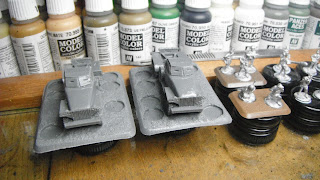 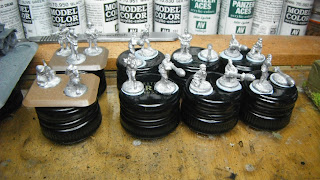 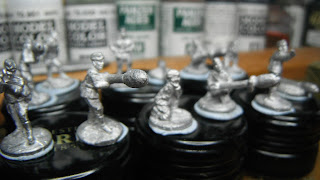 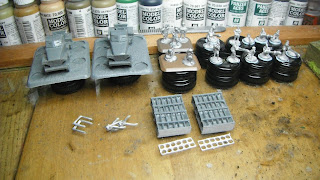 The pictures I took of the Soviet v German game were a disaster, to the point that I have given up with my old camera. The lighting up in the room is not good, and I also found that having just 18" either side of the table was too tight, I kept knocking the tiles and hill sections. I have now decided to play future games back downstairs in the dining room where the light is much better and there is far more room. When I get a free day I'll try again with a game write up and photos!

A quick note re Flames of War, with version 4 due out in March, and the news that the rules will be trimmed down to about a third of the current size, I'm delighted to read that the new publication will be given out FREE to those who hold a copy of the 3rd Edition - I have the hardback and it's a hefty tome. This is very pleasing and certainly will keep me playing this fine game.
Posted by 'Lee. at 03:16