Thank you to those who responded to my request for information on the early 1970's set of WW1 air combat rules. I'm pretty sure now that this is the set of rules I used (below), but my guess is that as these are a revised second edition published in 1977 it must have been the first edition as published in one of the wargame magazines around 1973 or so. 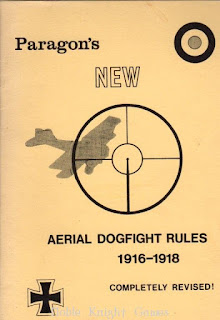 The Author was Hugh Walters, and the name was immediately familiar to me. I have managed to track down a set of the revised rules here in the UK, the description made me laugh, they really sell them don't they!

Description:
A 1977 revised edition of a set of rules for a Great War Aviation wargame. It is completely incomprehensible to the lay reader and can serve no other purpose in the 21st century than to provide a jolt of nostalgia. A tight & clean copy of a stapled pamphlet in Fine condition. Bookseller Inventory # 003218

I'm going to grab the copy anyway, even at £15 for the slim booklet of less than 20 pages it will be worth it to satisfy my curiosity! I still would like to track down the original magazine version, as that was what I used to make my flight stands back then, so any further help here from those who collect old wargame mags would be much appreciated. 'Battle' magazine has been suggested as a possibility.

I have discovered that there are other WW1 rules out there, some very similar in concept, featuring somewhat over engineered metal stands that only sit a foot or so above the table, or a board printed up to represent a landscape as viewed from above, these generally use 6mm scale models it seems.

Another set that does use the same style flight stands appears to be 'Triplane', these would appear to be a slightly more advanced version of the old stands, much taller and ........ they are on wheels, how cool is that! Found some images of 'Triplane' in action, you have to hand it to them. I'm sure mine were of a simpler design and the poles were not 6 foot as in this game.