I have just recently begun research into the lives of those who lived here in Dymchurch during WW2 and already it has thrown up some fascinating personal stories that I hope to share in due course. My main interest is in the period leading up to D Day when the Americans arrived and obviously created quite a stir locally! In  1944 a 10 deep mile exclusion ban was put in place all along the Kent coast as the preparations for the Normandy landings began in earnest. Locals were issued with Identity Cards and access was strictly controlled. Typhoons and Tempests were based at Jesson airfield (became a Holiday Camp after the War), and one local describes how two Typhoons returning home from a mission collided during a victory roll, killing both pilots. B17 Flying Fortresses and B24 Liberators of the US 8th Air Force were a common sight and several crashed in fields on the journey home, one coming down in the centre of Dymchurch. US infantry occupied seafront bungalows, including the barber who gave locals free haircuts. One eye witness, a child of Ten at the time, described how German bombers would come in "skimming the waves" to avoid radar detection before swooping up over the sea wall, so low that he could see the pilots clearly. In one incident on the Dymchurch seafront a British officer who was instructing soldiers in the use of hand grenades accidentally dropped one into a box full of them causing a huge explosion that killed and injured many of the men. Italian prisoners worked the fields and were described as being quite affable and no trouble.

The above is just a brief taster of life down here during those dark days, of course the Dymchurch Home Guard continued to serve and some were deployed to man the narrow gauge railway - opened in 1927 - where a loco had been converted into an armoured train. This short Pathe News film captures the spirit of the times. 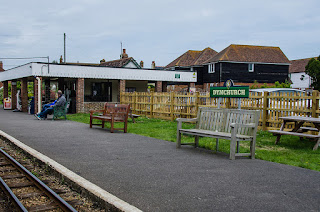