As it's half term and the house is very busy and noisy painting has slowed up a bit this week. But I'm still getting a bit in as and when I can. I mentioned previously that I was sent two Falcata Spanish infantry as a 'test paint' for what will be a full early Spanish army in 20mm. Tony dislikes the black undercoat/white uniform look as I know well, and I agree that while the 'skeleton suit' look works OK on my 15mm Essex figures it does not really work so well on larger scale figures, so I set to thinking about an alternative method to represent such predominantly white uniforms. I have of course seen many different methods used with varying degrees of success, but I was determined to avoid any kind of Army Painter type wash over white paint, as it - to my eye at least - leaves the finish far too grubby or dirty looking.

After a lot of thought and research I decided to trial a Vallejo white primer which is then washed over with a coat of 'magic wash' . The wash is made up of Klear floor polish with added water and black ink, and it leaves a remarkably good surface for overpainting but above all it picks out most fine detail in a subtle grey while leaving the surface areas clean. I am grateful to Kev Lowth (aka 'Fat Wally') for his advice in the use of the wash method, and anyone who might wish to see more pics of units painted in this style should take a look here (link). Just a note to add that kev specialises in 15mm figures painted at speed, and his method uses a second wash over the completed figures and the bases. I use it only once over the undercoat.

So I present here a series of images to illustrate the method as used on the two fine Spanish gents. What I can't show is just how well the wash takes the paint, the colours are vibrant as there seems to me to be a lot less absorption as with a straight black primer, and unlike a standard white primer there is no chance of finding small areas missed leaving the white showing as the wash runs into ever crack and crevice. I'm really taken with this method as it's very efficient from the painters point of view and leaves a great finish.

*Edit - the backpacks remain unpainted while we research the correct shade for calfskin. 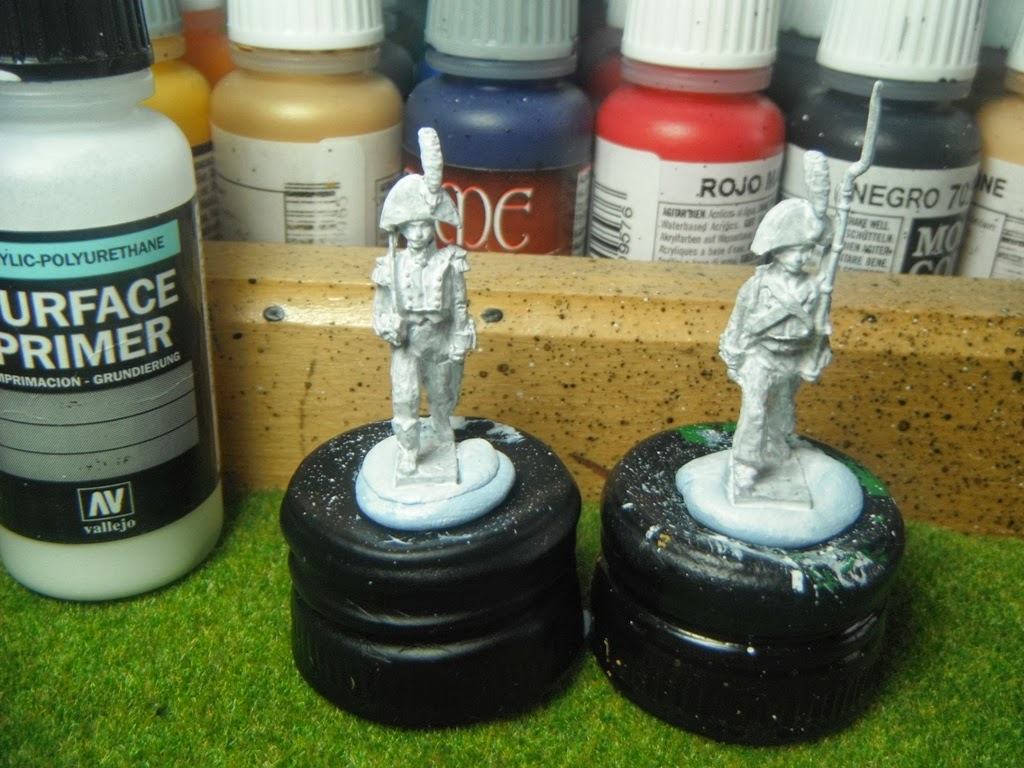 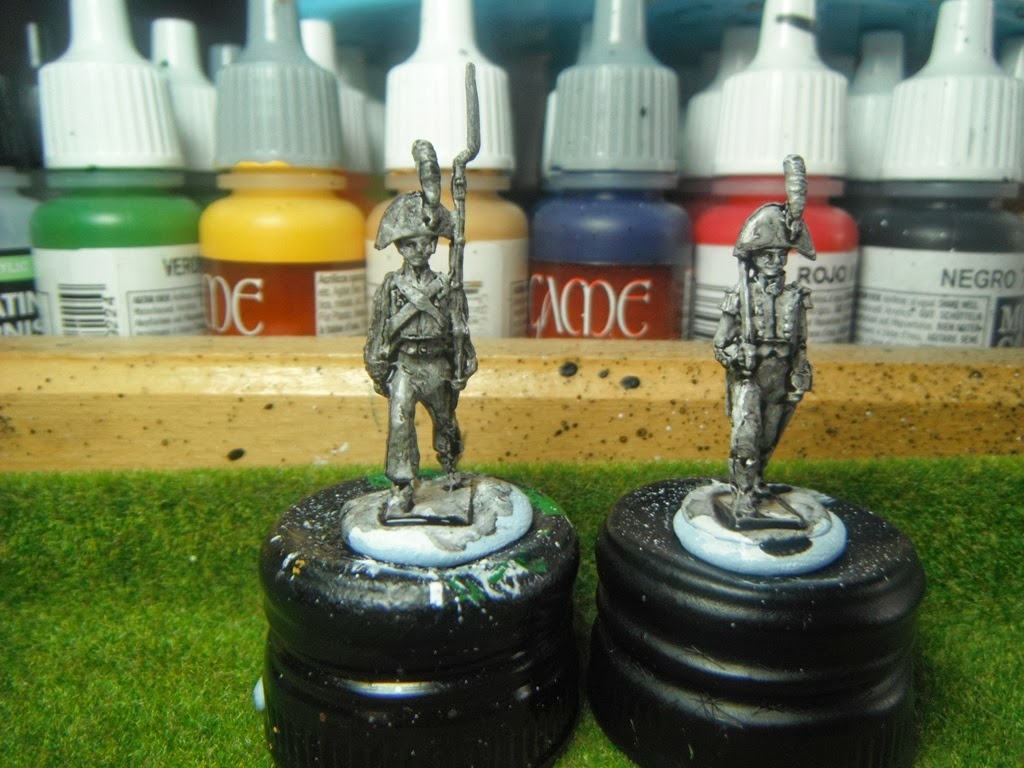 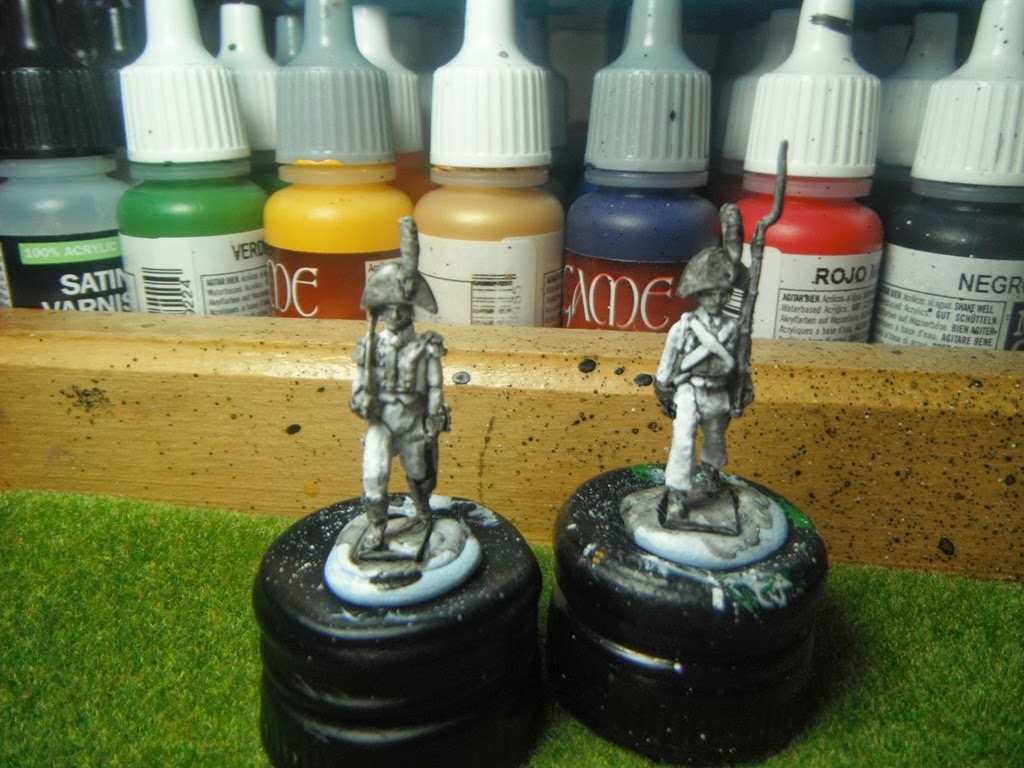 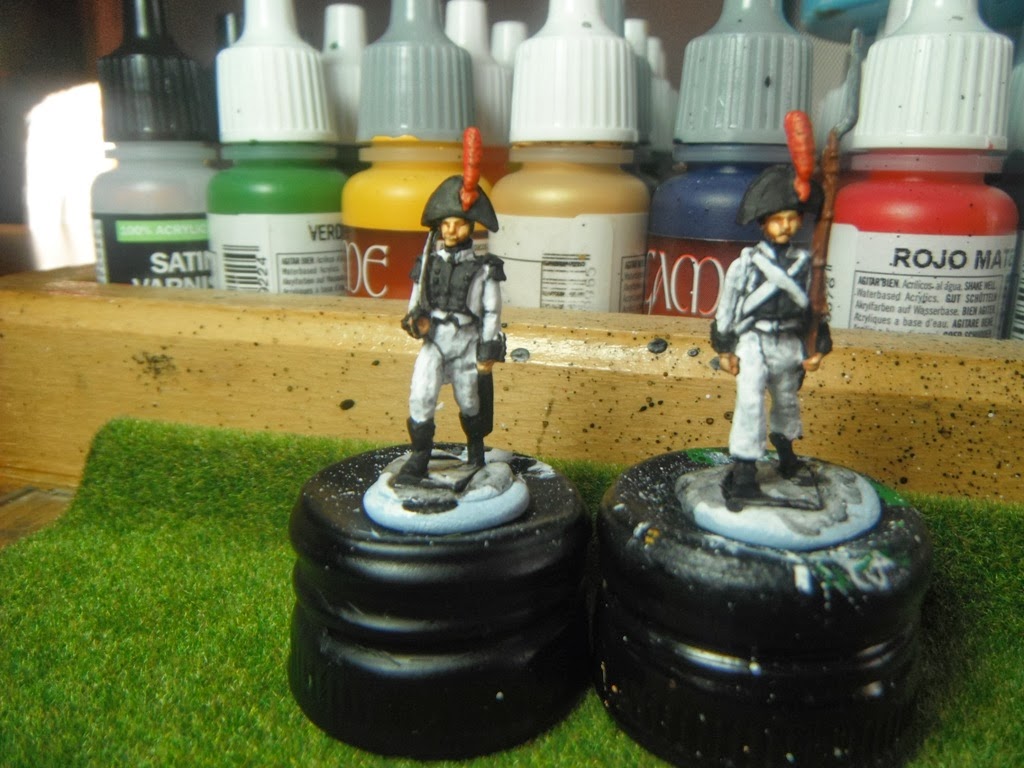 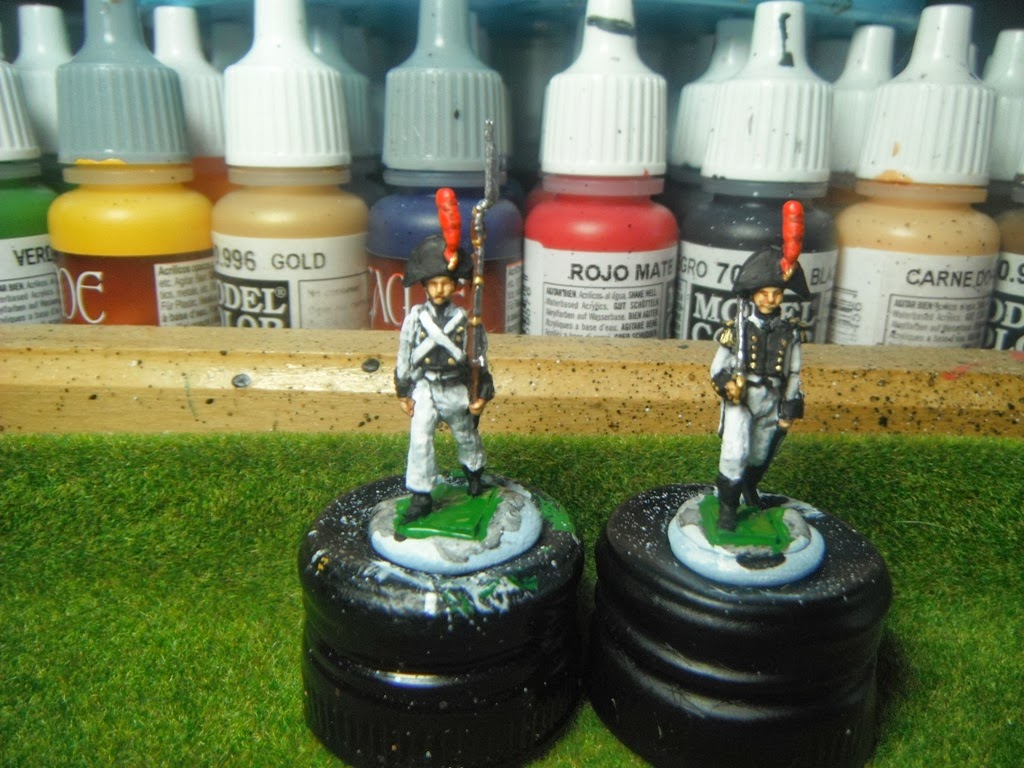 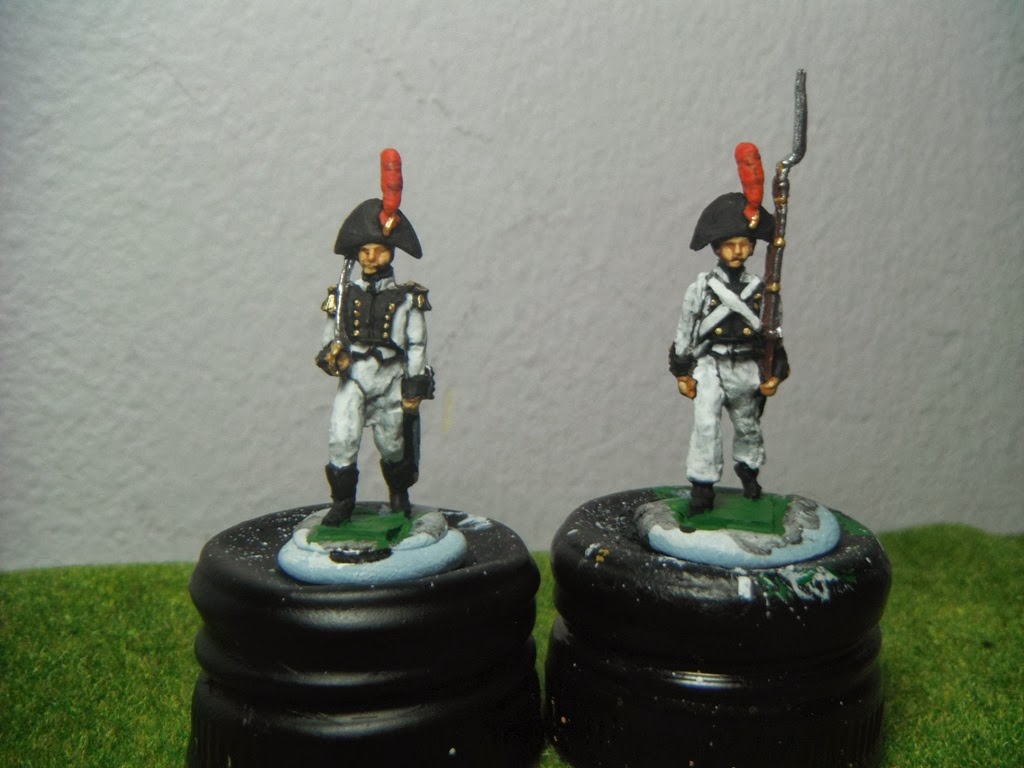 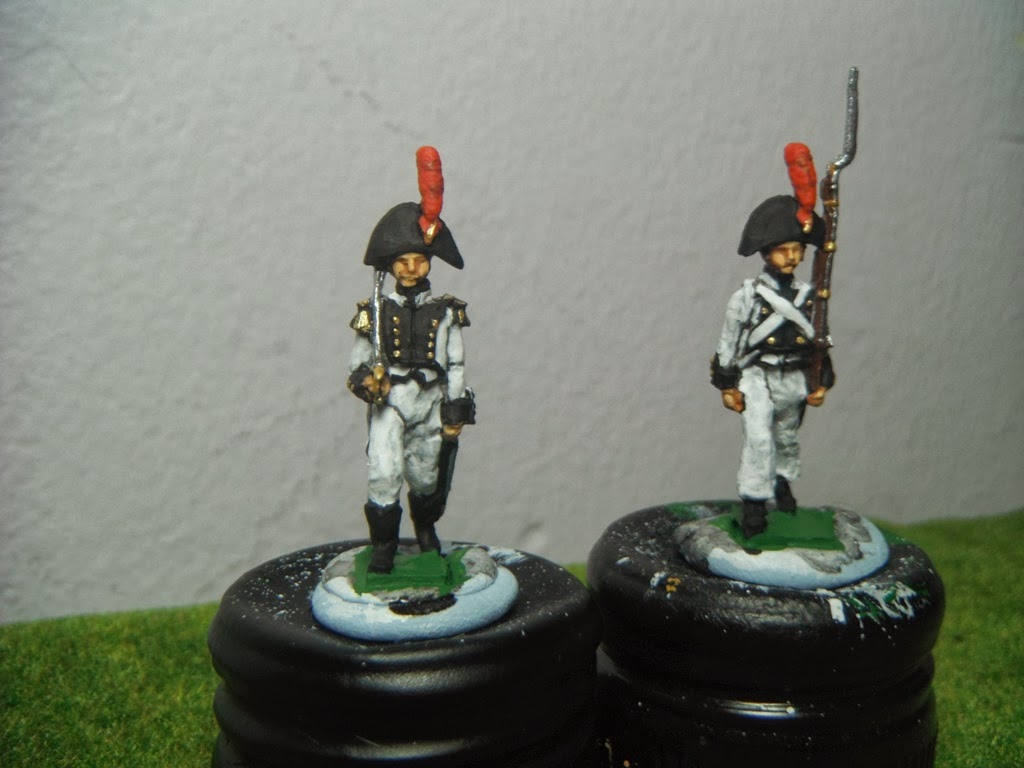 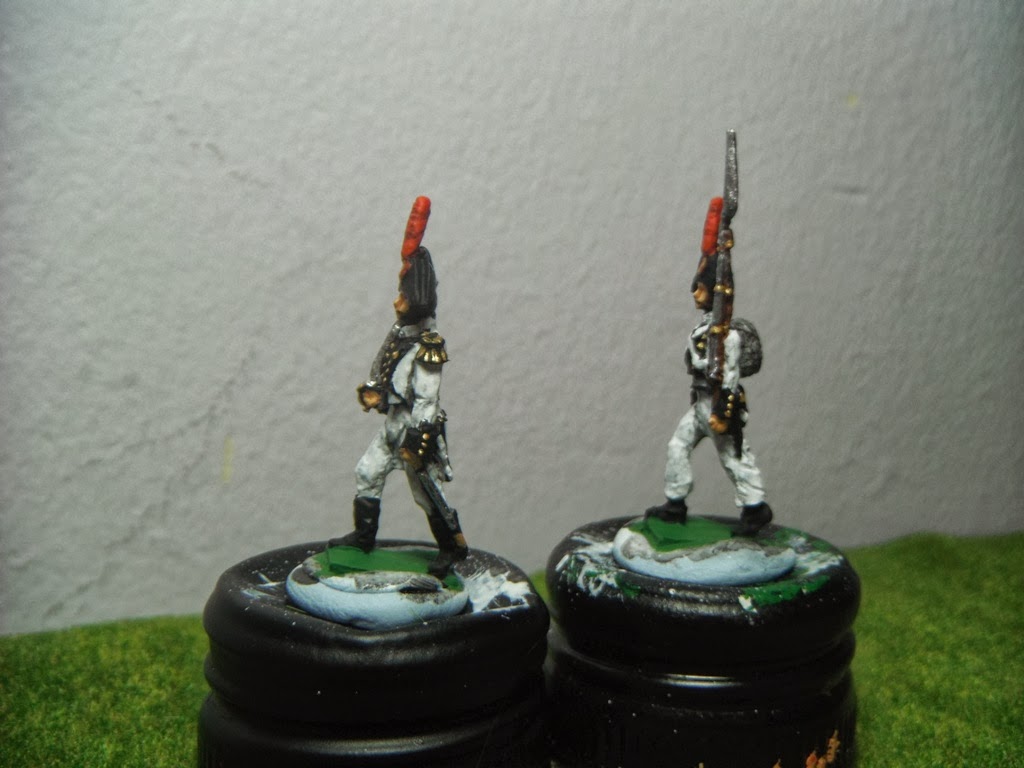 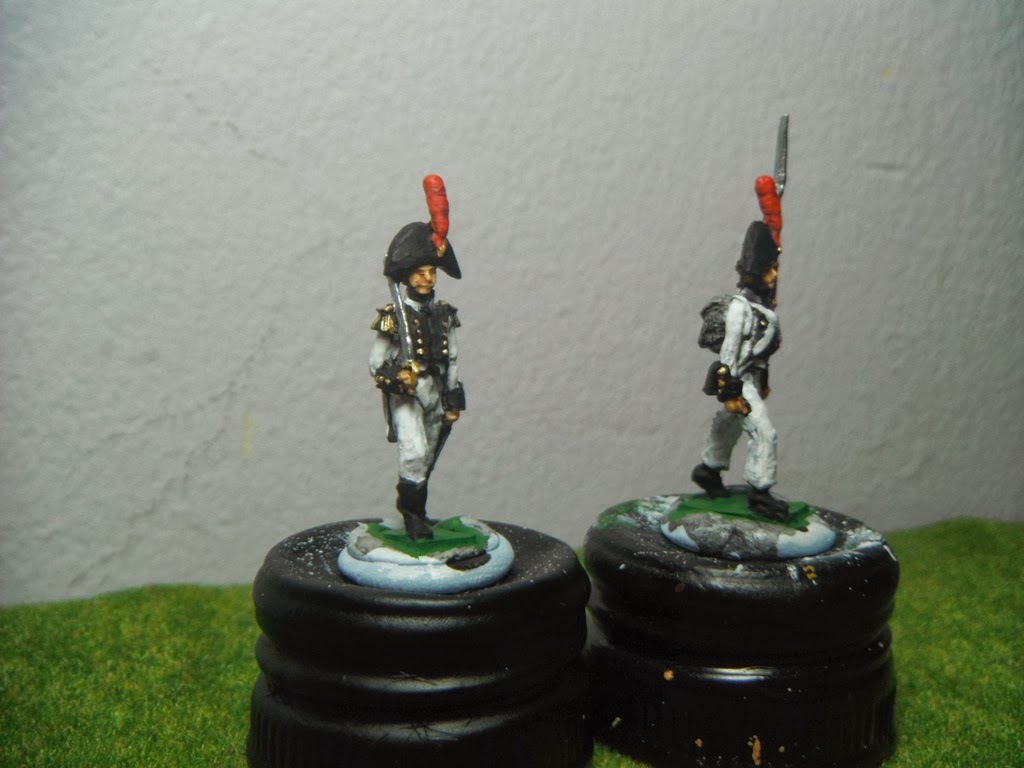 This unit has black facings as you can see, but even so I still think the finish is very strong and not a skeleton suit in sight! I would certainly anybody painting white uniforms  to give this method a try.

Essex 15mm Russian lancers.
I painted these four figures yesterday in between prepping up some 20mm ECW's and ACW's for the next week or so. I could find little uniform detail for these so went with that as shown and to be honest they will only represent generic Russian light cavalry in my C&C games anyway. 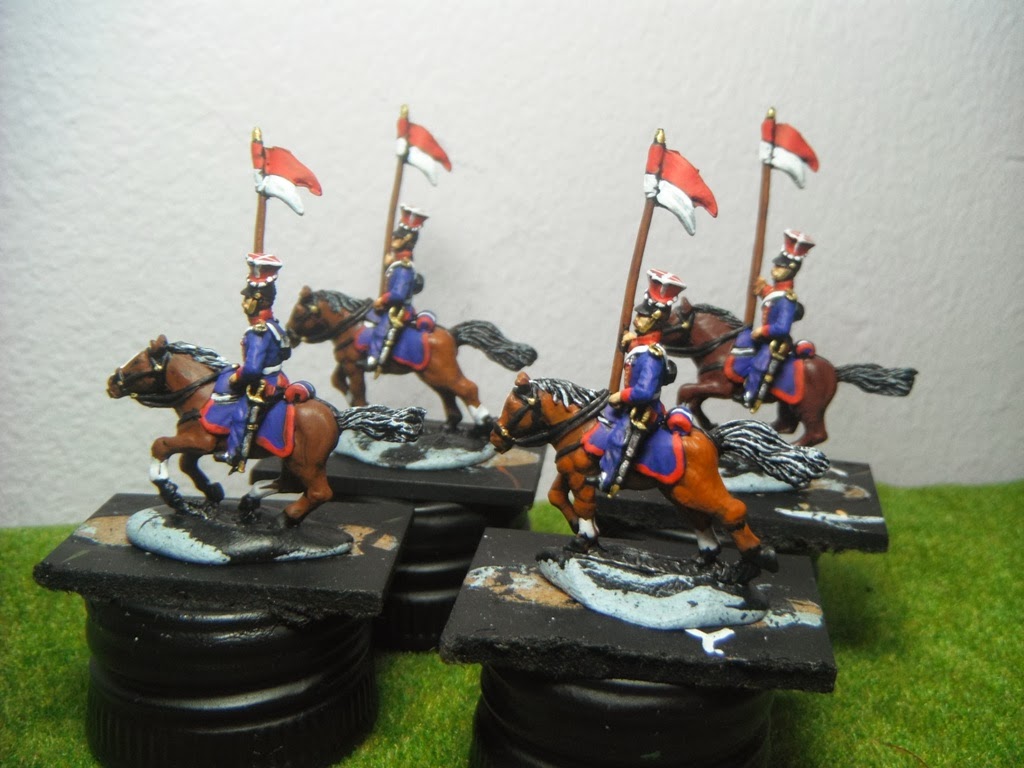 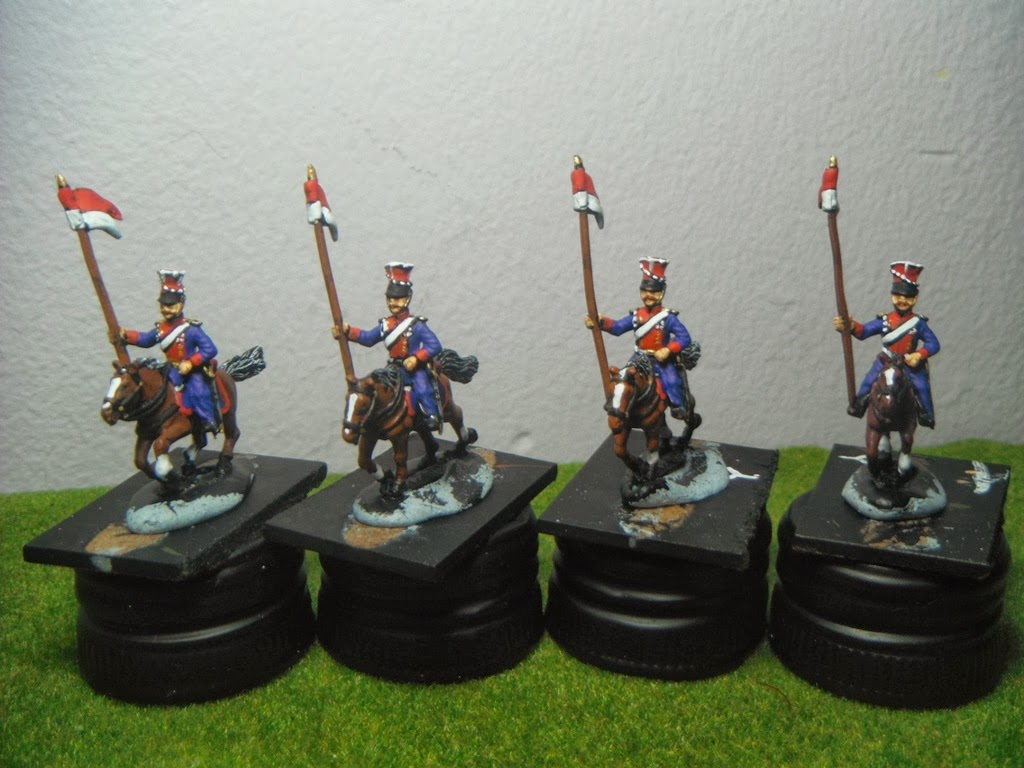 Commands & Colors 'Epic'.
I'm interested to find out more about this. From what I have read it features a double sized board and allows for large scale battles fought across the much wider frontage. The card hand is played differently and allows for more than a single card to be played so more units can be moved each turn. I have got to thinking that this could potentially allow me to represent more realistic formations, for example to have 4 of my 4 single figure units representing a brigade and possibly to include a command figure or two per 'brigade'. I could also brigade several cavalry units together which would enhance the game visually too. I'm just thinking about it for now, but if anyone has any relevant links about this I'd appreciate it if you could send them to me.

Right then, back to finishing of some Essex Chasseur a cheval for myself then it's onto more commission work while the wife, kids and Grandaughter are all out!
Posted by 'Lee. at 04:18