Where did that last week go? With all of the 18mm's painted so far now fixed on the new doubled up bases I have started to turn my attention to a bit more terrain. The painting focus for the next couple of weeks will be 20mm WSS figures for Old John as I really need a break from painting my own! It's been a fair bit of work and has involved vast numbers of MDF bases getting to this stage but it's been well worth it. A printed label was first glued to the rear of the standard 100mm x 45mm base then two of the smaller bases glued on side by side before giving the edges a thick coat of Vallejo 'glossy black. The result is nice chunky playing pieces for C&C, the thicker bases being easier to pick up and handle. The final bases completed were the French carabiniers and the Royal Navy landing party, both doubled up to full base strength. Only the single base of French Guard Marins remains because I just cant  find anyone that makes Engineers in the scale so I am contemplating a few conversion down the line.

I am a little unsure about the Carabinier trumpeter in reverse blue coat, most image show the 1812 Royal Livery with gold trim, but I have seen model units with the blue coated trumpeter so for now, blue it is, until I find out different. At least he looks rather pretty.

It had bothered me for some time that my lovely Hovels Spanish windmill did not have covered sails after it was pointed out to me. So now that it can be used in play due to the larger hexes I cut small sections of linen raided from my wife's craft box, glued  them on with PVA and water to give a kind of sagging look and painted them to represent canvas. Job done.

I spent a fair bit of time making the hills for the smaller grid but at least got the method worked out. This time I think the larger hexes will look better, I'm using just 3 'slices' of 5mm foamboard glued together with a 2mm MDF hex top and bottom for a height of 19mm. I refined the way of cutting out the hexes this time by gluing 3 small blobs of bluetac to an MDF hex which then held it firmly in position while I cut round it with a new scalpel blade. So far I have made 6 hills with more to follow, a couple each day. Once I have enough they will all get a skim of filler to the edges before painting them. Finally a printed top surface shot from the actual mat and printed on card will be glued to the top.

Roads & rivers: I am considering asking Tony Barr at ERM if he can cut me some straight and curved sections that will fit the hex grid as he did for me several years back. I think this might be the quickest and easiest way to solve this issue as I could then just edge them, paint and varnish them. Unfortunately the road and river sections that I have from S&A can't be used on the grid, which is a shame. 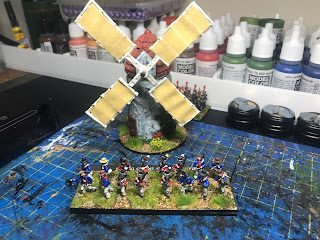 Inspired by Hornblower, two packs of the AB Landing Party make up this base for which I will need to create a set of C&C stats. I'm thinking 3 blocks, fire effective than line infantry but good at fighting hand to hand? 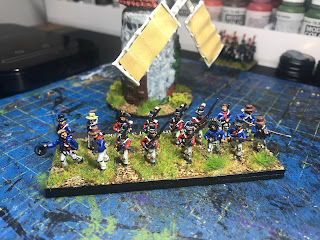 New hills under construction. The black plastic river sections were an experiment that I am just not happy with. MDF sections with a nice wavy edge will look much better I'm sure and save a lot of cutting out. 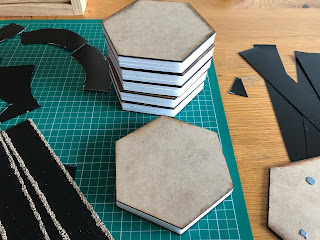 The larger hills look much better to my eye. 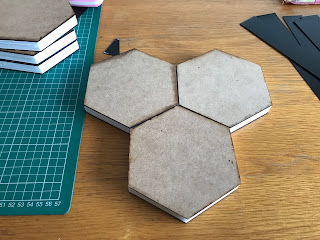 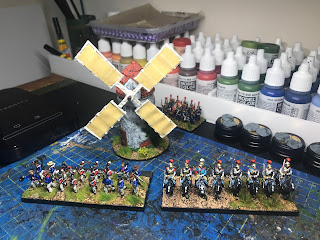