Another Commands & Colors clash on the board

Quiet morning again today so feeling much better than the last week of flu I decided to set up a game of Commands & Colors on the game board using just the terrain tiles. One aim was to see how it would work if played as a remote game using my figures rather than blocks, thus the grid markers down the left side and across the bottom, which would be the view from an opponents side. It's been suggested that a wireless mini security camera would allow for a wide angle view to take in the entire board in decent resolution so I'm looking into that on Amazon, they are surprisingly in expensive. I used the newly made 10mm foamboard hill hexes which really help to identify the high ground when the figure bases are sat on them and blend very well with the bright green board.

Once again I elected to use the Ramekin order chit activation system rather than the cards as I like the freedom it gives in ordering units and co-ordinating attacks. As previously I modified it somewhat, a standard 3 chits per side and a dice roll before each bound for additional chits. I started the game throwing a D6 for 1 to 3 additional chits but after a couple of turns switched up to a good old fashioned average dice which would produce between 2 and 5 additional chits. This works for me as it increases the average number of activations per turn and really keeps the action moving at a pace. I also used the 'out of command' challenge when attempting to activate a unit more than 3 hexes from a commander, great rule but bit odd having to remember to challenge myself in solo play. Apart from this I played the game straight off the quick reference sheet supplied with the Spanish Expansion including standing ranged combat just to keep things simple. When infantry form square against cavalry I simply deducted 1 order chit per unit in square from the next and subsequent bounds until the square reformed. Really just playing around with Ramekin and trying to keep things as simple as possible for my old brain.

Placing the chits themselves beside the units has really helped me keep track of things as they can remain in place to indicate any further actions after movement, so ranged combat then melee combat, once all are removed it's bound over.

A few observations from the game:

The Spanish infantry are rubbish fighters! They fire at reduced effect, fight at reduced effect and run away twice as fast as the French or British. I tried to be aggressive with two units facing off to two French battalions but were quickly dispatched with losses. That said I like the uniforms which is why they get regular outings on the tabletop.

British Light infantry are pretty solid being 5 block strength and throwing 6 dice when stationary at full strength (less under Ramekin modifications). I tend to throw them forward supported by rifles and they always give a good account of themselves. That said I did lose 1 unit to heavy concentrated French volleys.

Cuirassier cavalry are hard to beat in a charge combat, Carabiniers saw off a unit of British Dragoons in a single round of melee throwing 5 dice for the 4 blocks including a couple of sabres against the 3 block British cavalry.

Horse artillery are vulnerable if pushed too far forward unsupported to attempt to reduce the range. A charge by French Lancers wiped them out.

Forming square against cavalry in C&C is so well handled, you form square and you get to roll to try to 'bounce' the cavalry first (the reverse of normal melee combat), just the single dice but it happened today, a flag symbol and they fell back. Otherwise the cavalry get to hack back, but again with just a single dice, I have always liked this rule although some have questioned the automatic right to form a square and introduced a 50/50 dice roll which I can understand. Funny bit is asking myself ' do you wish to form square?' but I try to play as if playing against an opponent!

The result was 5/2 to the French this time with several units reduced to a single block and so pulled back from the front line to avoid loss, C&C encourages keeping units well supported taking care to keep some open lines of retreat for units that need to fall back. All in all an enjoyable couple of hours passed and clear down was quick and easy.

Random pictures follow, I only realised a few turns in that my lens was grubby resulting in some slightly fogged images. 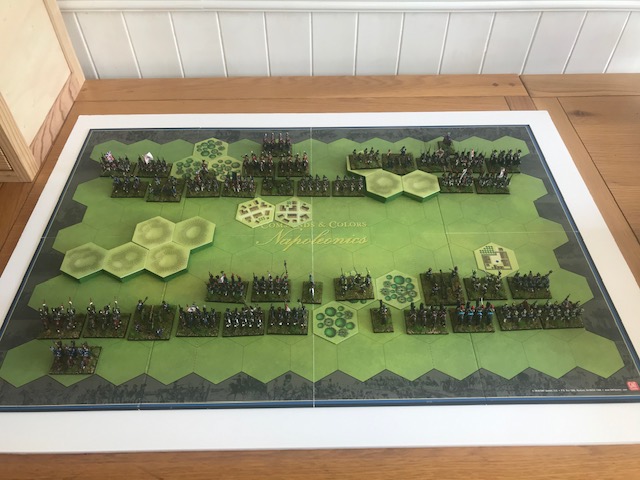 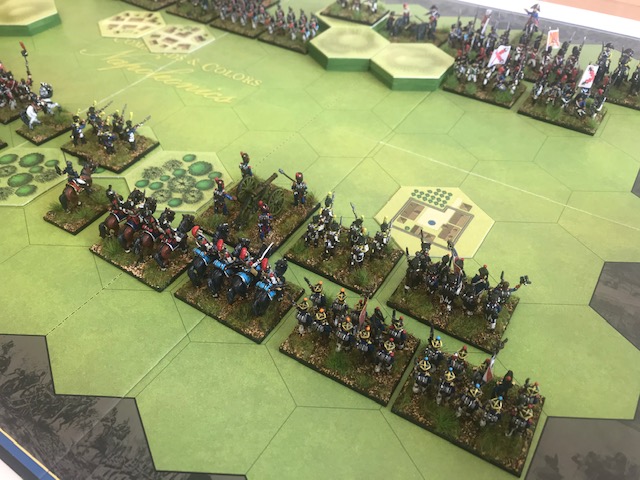 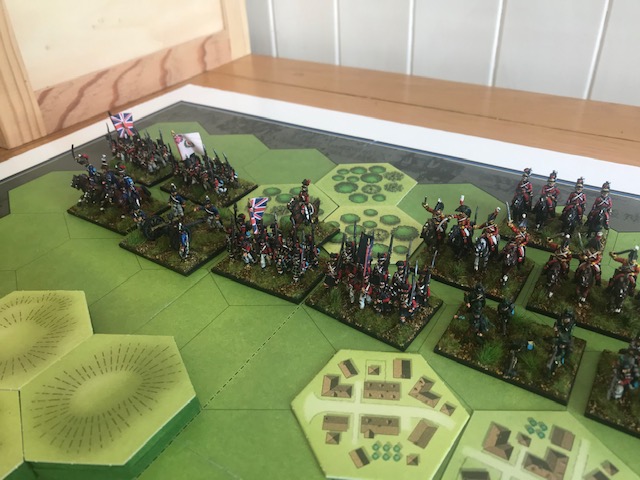 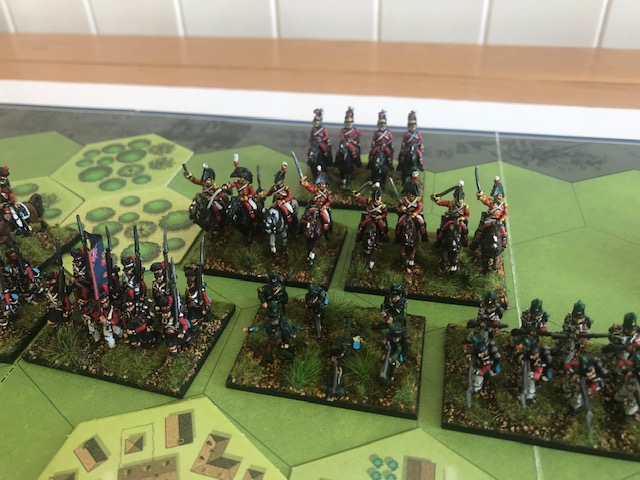 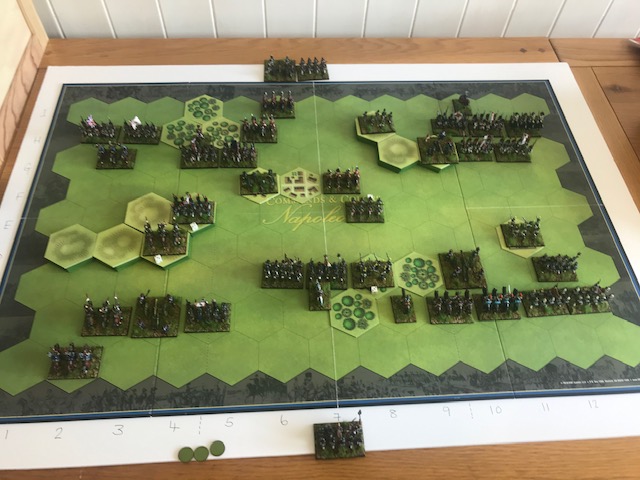 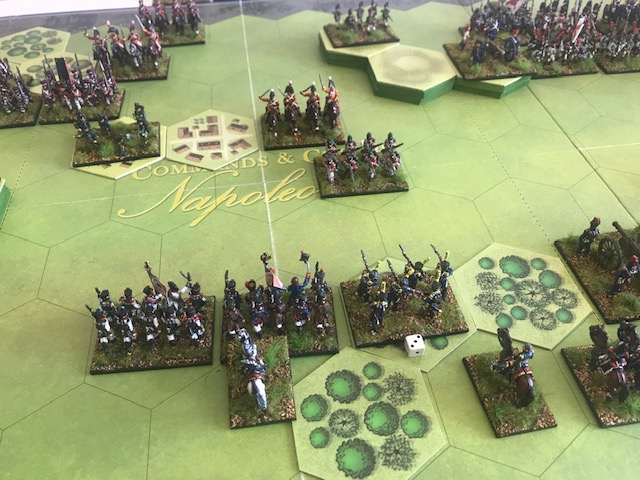 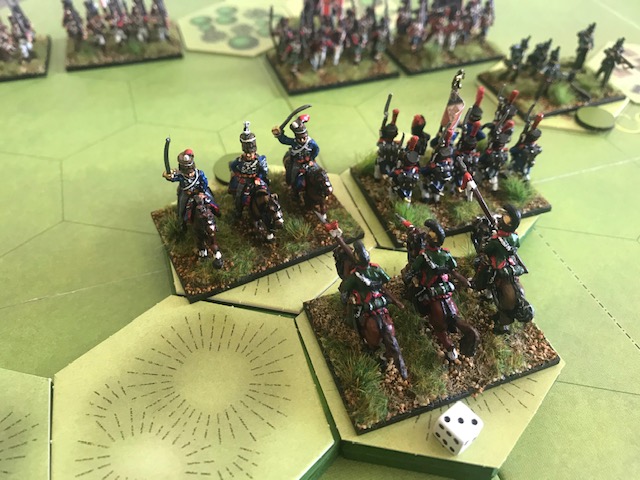 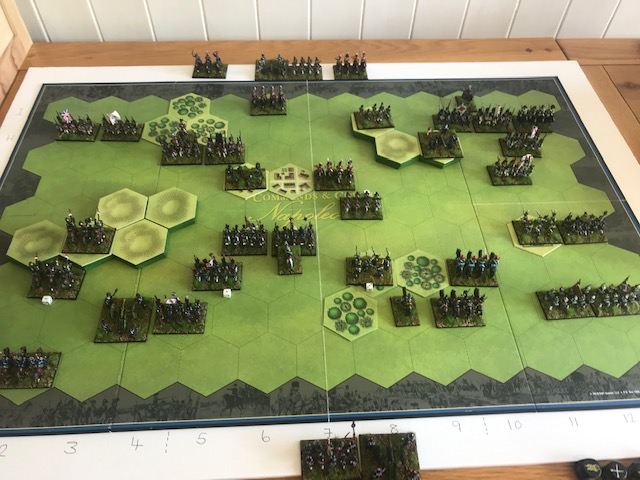 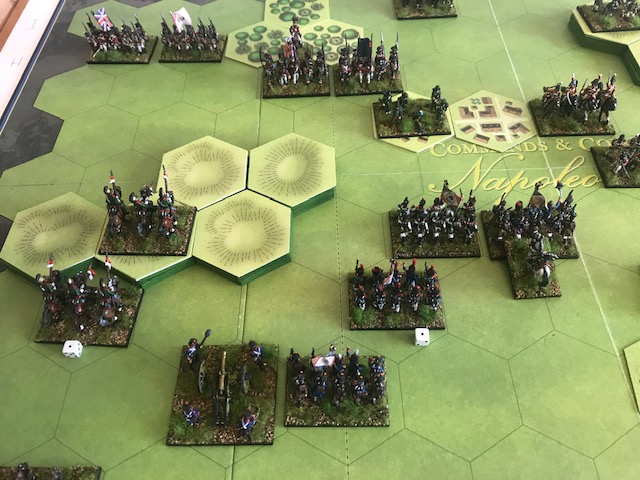 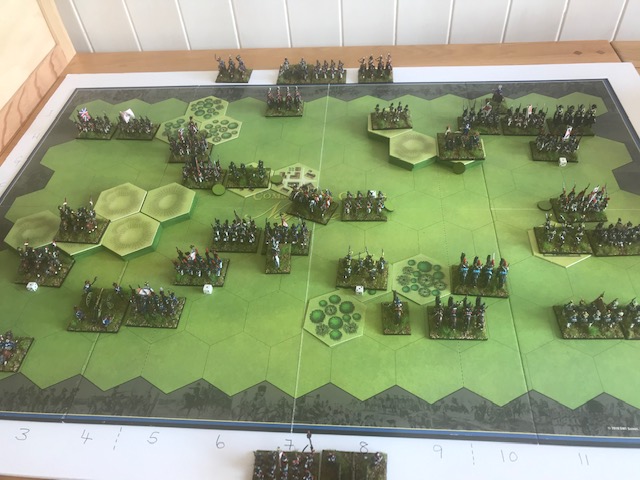 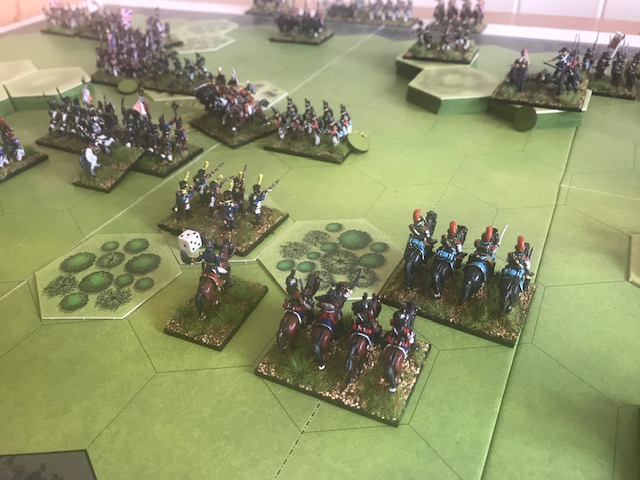 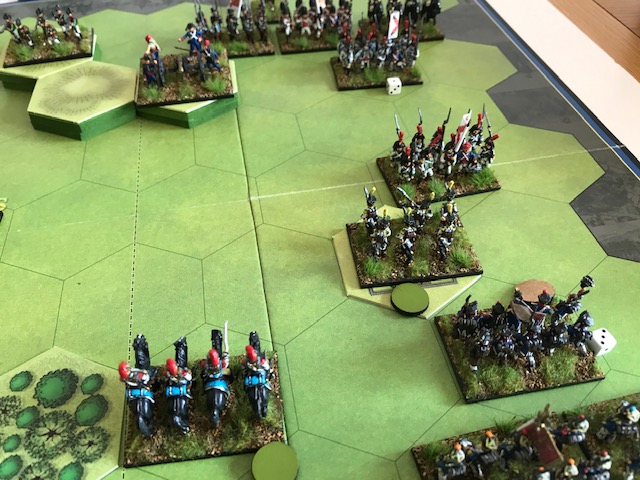 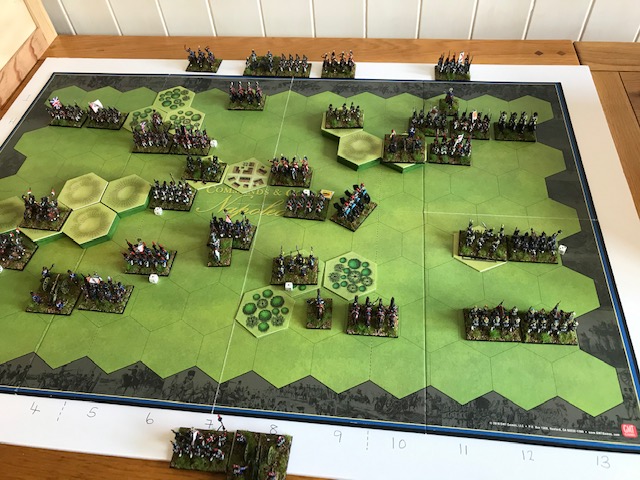