I must admit that before I started this I had questioned if the time spent would be rewarded with a half decent building or be a waste of time. I'm pleased to say that at this stage I'm really pleased. My modest ambition was to create a generic set of 'Peninsular' themed  buildings that would work with 40mm scale figures. I took the basic footprint from a set of 28mm's and increased height so that doors in particular would not look too out of scale against the figures, the result is still a BIG model but the houses will be smaller and the church is a bit of a statement piece after all.

The four sides have now been glued together and based to add rigidity. The windows have had more work and black card glued inside which may later be painted or fitted with frames. The reason I added a bit of grass texture to the base at this stage was to try to see how the overall model was going to look once complete, I'm going to line out the rest of the inside to disguise the Se Vende foamboard used for the main walls.

Next stage is to get the main roof sections to fit, so a bit more cutting and trimming required yet. After that it's going to require tiling with the Mediteraean style overlapping tiles for which I can use my own roof as a guide! If corrugated card overlapped in rows does not produce the look I'm after I'm prepared to tile the roof with individual card tiles shaped around a pencil or such to achieve a more realistic effect. Surprisingly, I'm really enjoying doing this so far.

British light infantry shown for scale. More once the tiling is underway. 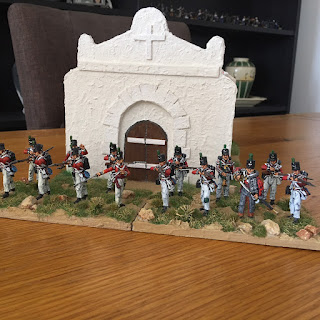 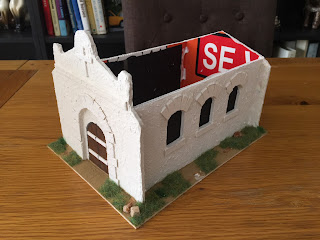