Making a start on terrain.

With the cuirassiers now sitting on the display shelves I find myself with time on my hands as I wait for the British Marines and the 15 resin figures that will comprise my Royal Horse Artillery gun crews. Ian has asked for the base thickness to be reduced slightly and has asked Graham to reduce the print size by a couple of mm's each figure to bring them into line with Perry's and Sash & Sabre, I had noticed that the officer was a man of stature. Ian tells me that once this set are completed the designer Dan can do conversions for 30 euros per figure, so when I get to add a rocket battery base down the line the rocketeers can be converted from the existing RHA files.

So, what better time to make a start on some buildings as I had been planning. I had drawn out three basic Spanish style buildings a few weeks ago on foamboard and decided to begin with the church/chapel. I needed the buildings to be larger than existing 28mm ones on the market whilst still retaining a modest footprint, they needed to be taller to work with my 40mm figures. Buildings will be based on textured bases to match the figures.

Here is progress so far, the four main components being worked on with the front pretty much as I wanted it to look. Roofing is being given a lot of thought with corrugated card laid in overlapping strips being the favourite to date. I invite any ideas or thoughts on this project as it progresses. The other two buildings will be simple Spanish villa types to match and then I plan a kind of Moorish tower. I'm also planning to make vineyards and have a few ideas on these. Rough road sections and wall sections will also follow, the idea being that the more terrain I build myself the more I can spend on the figures! 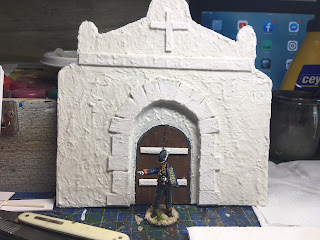 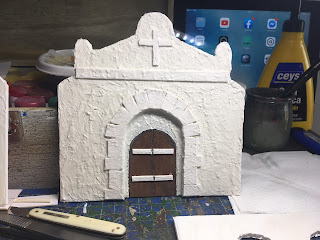 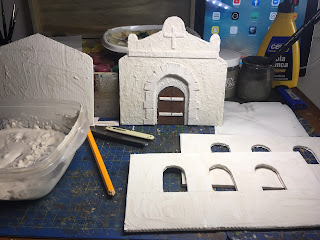 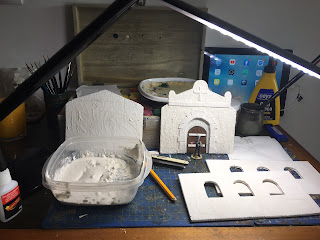