I actually ran out of figures to paint for a couple of weeks but this morning the delivery card was in the buzon so I shot down to Ador Correos to collect a delivery of Perry's. As always the little black boxes each containing a single 40mm figure made me smile, but they are obviously packed with great care and never had an issue with breakages. 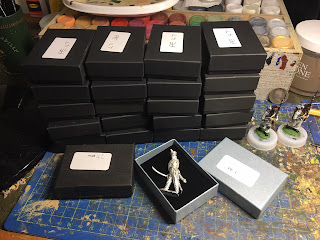 These are intended for a battalion of Italian line infantry, the two test figures of which I painted previously. To be honest I will probably stick with Sash & Sabre going forward as I do find them so well animated while the Perry's I find a little stiff in pose but I'm happy enough to have both in my collection. We have a few days of rain forecast for the week ahead so they will keep me busy indoors.

On order from Sash & sabre via Andy at Old Glory UK I have the following packs that should be with my daughter this week before they make the journey to Spain the following week:

The Highland command will complete my seventh British infantry battalion, the Cuirassiers will initially be an 8 figure cavalry unit that I will expand later to 16 figures. The French gun is to replace the massive piece I featured previously, it's just too big to look right as a field gun so it will return to the Oxen drawn feature piece and my French battery will consist of the howitzer and two 12pdrs. I don't actually think any 12pdrs made it down to Spain so I'll call them 8pdrs, but stand to be corrected on this? The rifles of course will represent the 95th on two skirmish bases and should contrast well with the 60th I already have.

This lot should keep me busy for several weeks, but planning further ahead as I need to when they have to be ordered from S&S in the US I really want to do a battalion of British Marines in round hats. S&S do make them in their 40mm 1812 range and having seen Ian Smiths unit I know I have to have them!

I'm sure some will have seen Ian's award winning 40mm Peninsular game, but if you have not seen it here is a link to an interview about the game he gave to Wargames Illustrated, make sure you enlarge it enough to see the quality of the figure painting as well as the stunning terrain, this is my inspiration and of course Ian is my partner in the planned RHA crews. The Marines can be seen in the bottom image.
Posted by 'Lee. at 08:14