My God, we have had some rain here on the Costa Blanca this week. A gota fria has caused major flooding and disruption along the coast from Valencia to Alicante and for once we are happy to be living up a mountain! YouTube has video of cars being washed along roads, drains and toilets overflowing unable to cope with the sheer quantity of rain, Alicante airport has all flight cancelled or diverted and schools have been closed. Just at a time when our friend from the Uk has started his annual holiday in Benidorm! It's scheduled for a few more days yet so perfect weather for sitting painting soldiers.

I'm into the Italian line regiment now and unusually for me I'm using a London Grey undercoat instead of my standard black. I think with white uniforms this works better as I follow up with a drybrush of Ivory before adding highlights of off white. I'm tempted to use a thin wash over this but fear it could just end up making the uniforms look too dirty so will probably leave as is. I decided to go with the 3rd Regiment with green facings rather than red, really to add a bit more contrast into the units. Flag is a web printed one with '1' overpainted in gold with '3'. Again the plan is to replace all flags with GMB versions in due course.

This will be an all Perry Miniatures battalion of 24 figures. The infantry castings are quite clean with the usual Perry casting worms to trim off. Once again they arrive with 90 odd heads to add another 60 + spares to my spares box (head mountain?). I note there are two different head sprues including bare heads, covered shakos, plain shakos and a nice head with a havelock cover at rear. each figure comes in three parts, body, heads and the upper part of the musket that needs to be glued into the fold of the left arm, the butt being cast on below the elbow. The musket fits very well with no problem but some of the heads are not so good requiring a little bit of filling here and there, nothing major though. One issue that does annoy me is that the strap for the water bottle does not come over the right shoulder, it simply is not there so I have resorted to painting the strap on as you can see. For a £4.50 casting ( £2.25 if you buy 10 together) this is something of an error that I am surprised to see on a Perry designed figure. 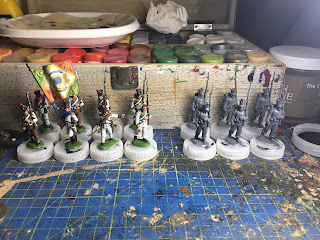 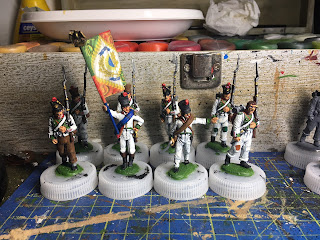 In other news - Ian Smith sent me the latest pictures of the first two RHA crew yesterday, the digital sculpts are still work in progress by Dan. I really like the poses and detail but will just double check uniform details, so far all looks good to me. I think the rammer could also have potential as one of my planned rocket battery crew with a bit of conversion work later. Slowly but surely this project is taking shape. 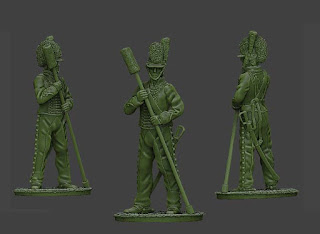 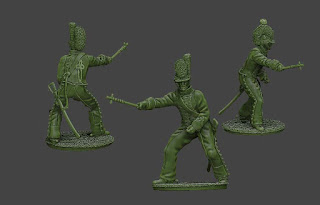