When I decided that I wanted another 'skirmish' unit for my British army I knew as soon as I saw these on the Perry Miniatures website that I had to have some. The officer wearing the red pelisse with grey fur trim obviously caught my eye so the 43rd it was to be.

I had considered doing an entire 24 figure close order light infantry unit in firing line but the cost would have been prohibitive when is so much else I still want to do. Whilst Perry do offer a half price deal on the basic French, British and Spanish line infantry (10 figures for £22.50) the rest of the range retail at £4.50 per figure. So these 14 figures represent a cost of £63.00! Sash & Sabre do not as yest make British light infantry unfortunately. Cost aside - and they are 40mm figures after all - I'm really pleased to add these guys into my British Army.

Under DBN rules each they represent 'skirmish' bases and under C&CN 'light infantry'. They have an increased movement rate, can move and fire or make a standing fire at increased effect, very good troops.

In 1803 The 43rd along with the 52nd and the 95th Rifles became the First Corps of Light Infantry and formed the Light Brigade under Sir John Moore at Shorncliffe barracks, Kent, (a place I know very well incidentally). Their Peninsular War record of service is extremely impressive - Vimiero, Corunna, Talevera, Bussaco, Fuentos de Onoro, Badajoz, Cuidad Rodrigo, Salamanca, Vitoria, even persuing the French army back into France. They returned home in 1814.

I present the 43rd Foot here alongside the 60th Rifles representing my Light Infantry contingent. Behind them are the guns of the Royal Artillery, (as they have not been featured for some time and are starting to complain !). Please note I have run out of static grass so the bases look a bit bare, will add more to the 43rds bases when resupplied. Also the Rifles need a second base layer added to bring them up to my now standard thick bases for ease of picking these heavy figures up. 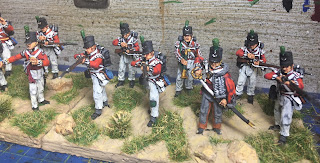 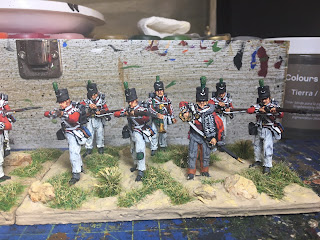 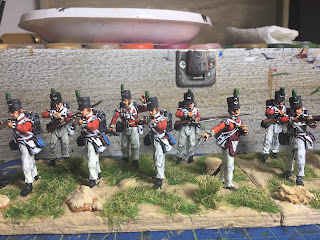 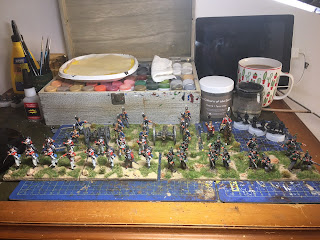 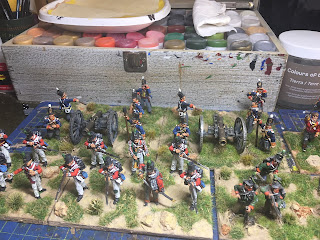 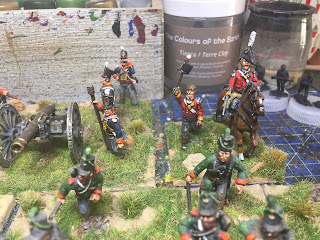 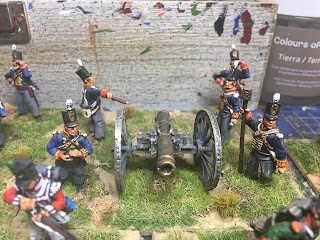 There may be slight hiatus while I get an order in to Sash & Sabre for the Cuirassiers and Highland command. As we are now booked to return to the Uk end of August I'm starting to think about just how I get over 450 of these big figures safely back home but I do have an idea on how to pack them. Meantime I'm expecting the resin 3D printed RHA officers any time now so they will probably be next up here.