I have been giving some serious thought to having a go at a bit of Napoleonic Naval, inspired as I have been by the recent shenanigans on Jolly Broom Man's blog. I have had the Sails of Glory set for over a year now but struggled to get to grips with all of the card tokens, the control panel and the order cards, I also find the printed sea bases somewhat detracts from the look of the thing, much preferring either Langton style sea bases or transparent bases. The ship models are quite nice, coming pre painted as they are. By adding ratlines and basic rigging and colouring the sails slightly they could be made even better I think. The base game comes with 4 ships and I added a 1st rate to each side. Here are a few shots of the game components and the additional ships. You can see that the Heroe has been given a bit of paint on her sails and very usefully she can be simply removed from her SoG base and used on her clear plastic basic with alternative rules.

THAT Langton Frigate again.
Some here might recall the Rod Langton model I built back in 2013. The Langton 'rigging bible' proved very useful in helping me to achieve realistic rigging. Oddly enough I have no idea what became of this model, I certainly don't have it anymore, I can only assume she was lost at sea in the defence of the realm, ( or down the back of a bookcase somewhere). The rigging took me days to complete, I went for the full rigging option with two colour threads to represent the different types. Shes at 'Easy Sail with courses furled' as often used in action to reduce the risk of the courses catching fire from the decks. I thoroughly enjoyed building, painting and rigging this little model.

The Sails of Glory models .
Having taken some time to think about things since writing the above it is clear to me that I will never be content with using the SoG models as they stand. While the hulls are very nicely done the sail sets are - in my opinion - not so good. I can see from the production point of view why they are the way they are, being resin and designed for frequent handling, but while they look fine from the bow or stern they are not so good from the sides.

My idea is that these models would be greatly improved with the addition of Langton metal sail sets and brass etched ratlines. On the frigate above I went for 'fighting sail' setting and used the etched brass sails, very fiddly as paper thin and delicate, but the finished result was very pleasing. The SoG decks are drilled and plugged so the plastic masts can be removed without damage and metal one's inserted. If Mr Langton has no objection to selling me 6 sail sets without hulls then that's the way to go. I would go for the brass sails again, fiddly as they are, in for a penny in for a pound as they say. I think a very nice little fleet could be assembled this way and the option remains to expand with Langton metal hulls down the line. 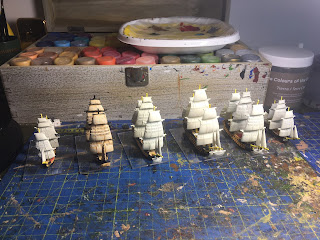 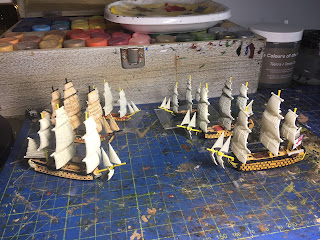 Below: the SOG models on their sea bases, I really don't like them at all! 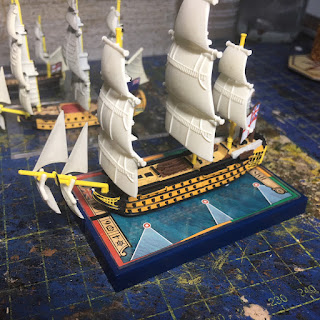