Shaz returned from a week back in the Uk visiting the kids this morning, early flight from Gatwick to Valencia, metro to Valencia railway station and a pleasant train journey down the coast to Gandia where I met her for lunch. I was of course glad to have her back, but also glad to have the IPhone 5 back because I just cant take half decent photos on either the Cannon or the smaller older phone that I use when she's away, hard as I try. So I have replaced the images of the 43rd light infantry base in the previous post with much sharper ones and took a few snaps of the latest skirmisher base I completed yesterday.

This base represents Voltigeurs of the 15eme de Ligne, they are wearing tatty 1807 white uniforms with black lapels, piping to turnbacks and cuffs. I assumed the light company would have yellow collars (the battalion companies wore black collars). The epaulette arrangement is based on an image I found on the net, they should possibly be yellow but the green/yellow arrangement does look nice and makes a change! These are again all Perry figures.

Next up is the job of finishing off the 45th Notts. Regt who have been just 3 figures short of the full 24 for some time. As I have now used up all of my Sash & Sabre British infantry I'm painting 3 Perry line infantry and will probably fiddle things around to they mix into the rear rank of the second base, they're really not a bad match, maybe just slightly slimmer, but I prefer the more animated S&S figures.

The thick bases are mostly practical as they allow me to safely up these heavy figures. 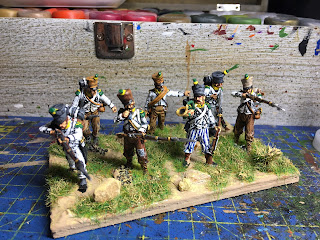 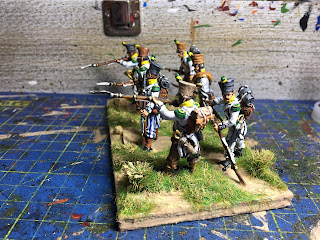 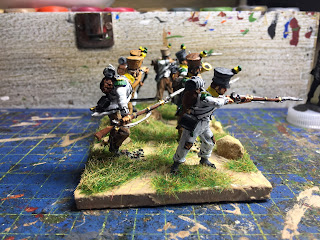 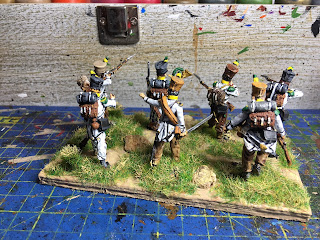 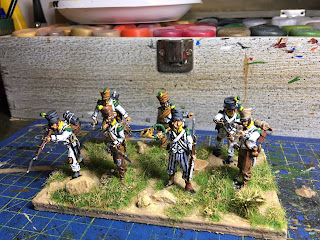