The 45th Notts. Regiment completes British battalion number 5, with just the 5 Highland command to complete battalion number six, each of 24 figures. It's taken over a year to get to this stage and I have finally used up every Sash & Sabre figure that came from Andy when I first arrived in Spain.

I was actually 3 figures short, so had to use 3 Perry line infantry to make up the numbers. They are slightly thinner and in my opinion less well animated than the S&S castings but slotted in pretty well apart from one thing ....... they are out of step! Never mind, I only used one in the front rank and two in the rear so it's not too apparent, but I'm sure the sergeant will be having a word with them. Apart from another light infantry base planned for later for me now the future is Sash & Sabre. 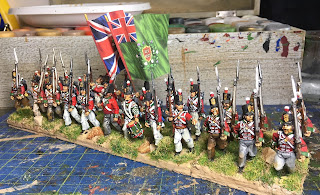 Next I'm back to S&S for the Highland command pack, more Heavy Dragoons and the French Cuirassiers.

Currently the collection, British & French, are evenly balanced, consisting of :

In addition there are:
1 base of 12 Spanish infantry.
1 bloody huge 'captured' French 12pdr drawn by 4 oxen with 8 Spanish character figures/gunners.

For a grand total so far of 374 foot  + 58 mounted = 432 figures and 5 guns. Not bad at all in 40mm scale and there is plenty more planned. To be honest I really have little interest in much else, the pleasure I get from painting these large castings exceeds anything I have done before. 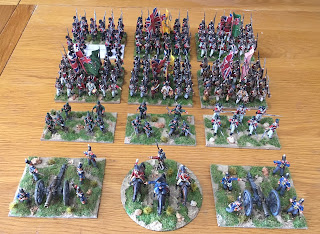 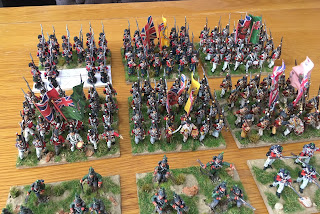 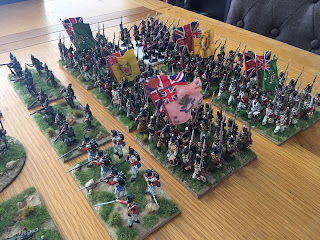 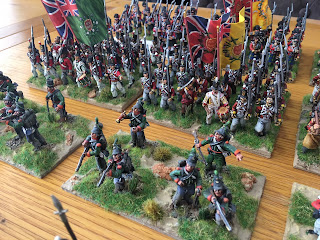 Reworking the infantry bases.
Finally, I have been giving some thought to basing/formation. I like the big DBN bases but there is one thing now bothering me ...... my battalions can't form line with the command group in the centre! For DBN this is less important of course, but it would also give me the option of playing more conventional games with 24 figure battalions able to form in column or line. So I did a test on the 45th Regt by simply soaking the rear large base in hot water, removing the figures intact from the sabot bases I use and replacing them on half size bases. It took no time at all, a bit of trimming here and there and a touch of my filler mix around the edges and the result is as you see below, just what I wanted. The two half bases can of course be used together as a single DBN base....result. Now I just need to give the other 11 battalions British and French, the same treatment! Not strictly rebasing - something I have sworn not to do with these - but a simple 'cut and shut' job! I know they are slightly scruffy looking but they are practical for picking up and I may well dress those edges once they are all done. 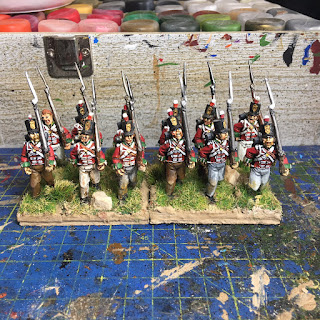