43rd Light Infantry - composing the base.

Had plenty of time on my hands this week so got a fair few hours painting in. These Perry Miniatures were painted over three days, not sure how long they took but I watched/ listened my way through the entire series of 'Hatton Garden' ( I worked there years ago and the safe deposit facility that was robbed was just a few doors down), followed by a couple of factual documentaries about how the police caught up with the perpetrators, a couple of History Cold Case episodes and a 90 minute documentary about how the Kray twins built a huge financial empire from inside Wandsworth prison. I must also confess to having watched a couple of episodes of the old 1970 series UFO ....ahem, purely nostalgia you understand! Anyway, that must add up to a lot of hours spent painting these seven figures. I think they were worth it.

They represent a unit of 'SK' infantry under DBA rules, so my standard 7 figures on the 120mm base for such. I used a more staggered basing on the French Voltiguer bases but for these I went for a more formal loose firing line effect. I could not make up my mind if I should place the skinny officer figure in the front or the chunky sergeant, but after a bit of trial and error went with the officer as he is a real character and in my minds eye is giving the order to fire by lowering his sword. I'm pleased with this base and will be adding a second base of the 43rd later in the year. 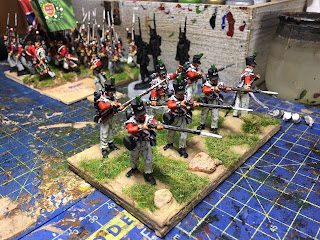 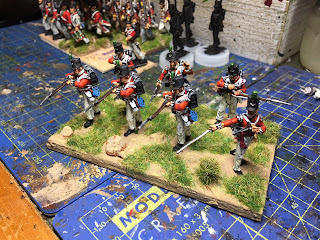 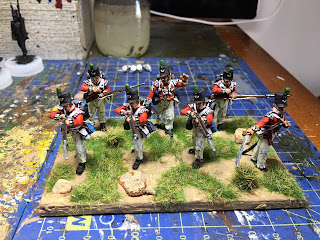 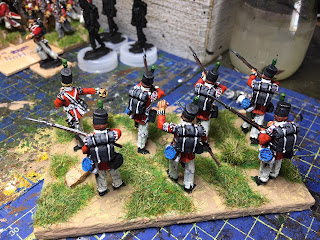 I had 4 Perry Voltigeurs from the original lot of painted figures I bought from Andy over a year ago now, a couple were in white uniform coats so I thought I would make up a full seven figure 'SK' base in white coats. I just need to add two more voltigeurs firing/loading and the magnificent Perry 'French Voltigeur cornet standing in habit'. A bit of further research is required regarding the white uniforms, I do recall a couple of French units in white in the Peninsular, but need to check facing colours and other details. 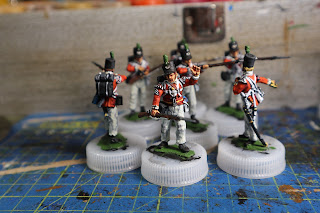 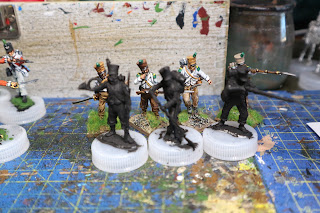