"All quiet along the Potomac tonight".....


"All quiet along the Potomac tonight,
Where the soldiers lie peacefully dreaming,
Their tents in the rays of the clear autumn moon,
O'er the light of the watch fires, are gleaming;
There's only the sound of the lone sentry's tread
As he tramps from the rock to the fountain,
And thinks of the two in the low trundle bed,
Far away in the cot on the mountain."


With my French & Indian War project rounding off I have been casting around for something that takes my fancy as a follow up for weeks now. It had to be primarily a painting project as that's my main interest, and also something that would allow units to be built up fairly quickly. Having persevered with Sharp Practice to the point where I'm ready to play a game and feel I have a reasonable grasp of the rules it made sense to build alternative armies for the game. I had watched a few ACW based SP games and enjoyed them so much thatI gave in and ordered the first of what will become my Sharp Practice ACW forces. SP lists three forces for the early, mid and late war, and I have decided to build the mid war lists for both sides to begin with. 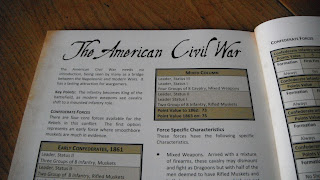 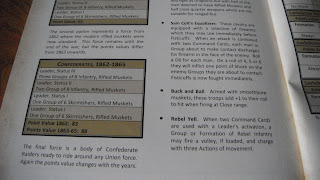 Essentially, for this 'large skirmish' game I will be representing the men of a single regiment per side, broken down into groups of 8 figures - I like to think of them as companies - with 6 figures per group for those in skirmish order. I'm starting with the Rebs, and the mid war list is as follows:

Leader, status I
One group of 6 skirmishers, rifled muskets

Leader, status I
One group of 6 skirmishers, rifled muskets.

As you can see it's a fair sized force to get started with, and can be supplemented from the Generic Support list. What I need to decide on next is which regiment I want to represent.

The figures I have chosen are by Renegade Miniatures, wonderful 28mm castings of real character. I wanted to go with metal one piece castings, no plastics,  and after much thought decided upon the 'marching' pose for the main groups, and' firing line' for the skirmishers. I decided against the classic 'Right Shoulder Shift' pose used when advancing at the double, and instead go for the more sedate marching, order arms pose with musket tucked into the right arm and upright. Muskets were of course universally carried on the right shoulder during the ACW, as evidenced by drill manuals and countless paintings and photographs.

I'll get started soon as the figures arrive. IN the meantime I'm planning a Sharp Practice FIW game this weekend as the family, (wife, daughters, granddaughters) are off to the Great Metropolis for a day out on Saturday. I'll write it up as best I can in order to explain some of the unique features of  the rules.

Time to get down to some reading!