The family, (Wife, three Daughters and two Granddaughters) are all away to Brighton for a few days, having a Christmas spend up so I have some quiet time on my hands. With the Southern Rail dispute on going the journey home should be interesting but hopefully they will find a way back!

Progress has been slow on the painting front this past week or so, just a 5 model Soviet tank destroyer platoon added and some infantry added to the captured German half tracks featured recently. I have quite a bit of stuff in hand though to do, so I thought I would list some of what I have planned going forward.

Terrain.
The additional tiles and hills that I ordered from Total Systems Scenic are now about to be sent out, so I'm quite excited to get my hands on it and have a play  round with it! It's from the 'Space Saver' range as are my basic 6 x 4 set, and at 20mm thick it does save a lot on storage space in addition to being very durable as it's made from Styrofoam. The hills are all 20mm contours so standard hill height is 40mm, this should allow me to create extensive hills rather than the small oval style hills I had thought about using, so for example a full 600mm x 600mm tile can be placed on the board and then edged with 'lower' hill contours, then 'upper' contours added. Once I have it I'll take some pictures as it's much easier to illustrate than describe.

The 'Battlefield in a Box' range produced by Battlefront in conjunction with Gale Force Nine has proven to be irresistible to me and I have now added more Rural Roads, train track and expansion sets and Dug In markers to my collection. Some of the best pre painted scenic items I have seen, all the roads are made from latex rubber.

Flames of War dice tins.
The avid collector in me has been drawn to these tins for some time, but I resisted until recently when I bid on and won a German tin for the 9th SS Panzerdivision. I really like the quality black dice with the Division symbol replacing the '6' and matching acrylic F0W markers. Some are up for crazy prices, the HitlerJugend set for example is currently on eBay for a Buy it Now price of £112.00! I understand they are  now Out of Production, but that's just madness. I'm looking to add the US 2nd Armoured Division set at a far more modest price as it would finish off my US army perfectly.

That's it for the time being, I have two Battlefront Jagpanthers on the painting table to be followed by three Panthers (the box offers the option of both). But priority now is to write up a game soon as the new TSS tiles arrive, Soviet armour V's German Panzerdivsion, 40+ tanks and tank destroyers on the table should be fun.


Finally, I discovered this map showing the sights where German Flying Bombs had landed around the stretch of coast where I live and it staggered me. You can see Dymchurch at about central point between Hythe and Lydd, the black dots each represent a bomb site. I cannot imagine how it must have been at that time, but it's made me want to search out more local information relating to life during WW2 along this stretch of coast, as I feel it could be of interest on the blog. 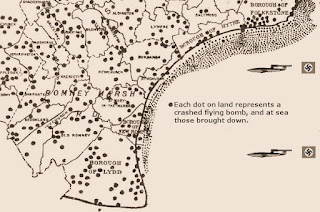 We now have a 'Tourist Webcam' streaming live images of Dymchurch beach looking towards Hythe Bay, not much to see this time of year, but I'd like to find out more about the beach defences during the war and have started some local research.