Wind and rain and yet more wind..... the home front.

What a start to January! Aside from yesterday when the sun did indeed show it's face for a while, it's been constant heavy rain and strong winds. With the short break in the weather yesterday I went for a drive around the Romney Marsh where I live and was surprised just how flooded the fields are, the drainage dykes are full too which is very unusual, not seen the water level so high for 10 years. But it reminded me just why we moved down here from London 12 years ago, sold up, gave up our jobs and took the chance, because the Romney Marsh really is a very beautiful spot and something about it's magic drew us down here. I don't think there is a morning goes by when I don't think back to my commuting days and the joys of the Elephant & Castle roundabout in the rush hour, we made the right decision.

'Borrowed' shots of the Marsh.

I played out the Envelopment scenario above, the Germans took heavy casualties but with the Sherman knocked out (tanks don't hang around long in BA!), they were able to rush to the defensive zone on the US left flank and win the game. Had a slight issue with High Explosive shots from the StuG, took me a while to figure it out, but fact is that troops in buildings are very hard to 'hit', although if you do successfully put a HE shot into a building it can be pretty devastating for those inside it. My issue was that I failed to hit the building with the StuG only 12" away, requiring a six and failing, big gun, big building but missed it.

On the general subject of shooting in Bolt Action, one clever little touch I like is that even when modifiers take the 'to hit' score above six ( and it's one dice per 'shot' ), there is still a chance of hitting if you roll a six followed by another six. Shooting is squad to squad, you add up your shots, and each shot gets a dice throw, so for example a squad of six riflemen (1 shot each), a LMG (3 shots) and an NCO with submachine gun (2 shots) get's 11 shots if all weapons within range, pick up the dice and roll. Any hits on the target will put a single 'pin marker' on them, and then roll on the damage chart to 'kill'. All very easy to remember. Target player generally allocates the casualties, but again if a six is rolled on the damage throw, then the shooting player can try to cause 'exceptional damage' by rolling another six, which allows the shooting player to select the casualty himself, the NCO or officer being the obvious choice as this puts another modifier on the 'order test' roll. You roll lots of dice, but it's all straightforward and lots of fun. One thing to keep in mind (note to self!), is that a target unit always has the choice of 'going down' in response to shooting providing that it has not already received an order for that turn. This adds one to the score needed to hit, but of course that's it's order for the turn, so it can do nothing else later.

I have added a US jeep as a recce model, they can zip about in BA, they can even make an escape move at full speed in reverse! It carries a 30cal MG for protection. The Sherman are built and undercoated, one disaster, set of front drive wheels stuck on wrong way round, hard to see but they had to come off again and be turned, which resulted in one breaking. Managed to make a reasonable repair, but at £18.00 per kit I'm not too happy with myself! Panzer III will follow once these are completed. 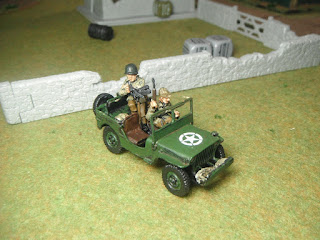 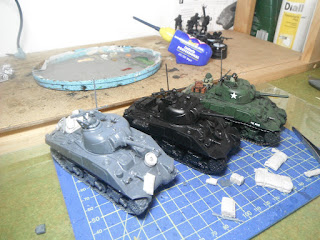 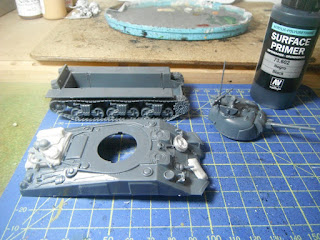 The 15mm Flames of war collection is now being thinned down to a basic six platoons per side, comprising  the 'Open Fire' lists with additional tanks. More than sufficient to keep me happy, I have no intention of giving it up, but will leave things there for a while.
.