Breaking up 'line of sight' for Bolt Action.

With the festive season now behind us and the Flames of War trim down going well I thought it time I finally made up my mind to commit fully to 28mm scale and get going on upgrading the terrain. A few play throughs of BA have convinced me that I need to break up the table far more in terms of sight lines, to avoid those long range shots knocking out tanks before they can really get going! To this end here's what I plan to do during this week: 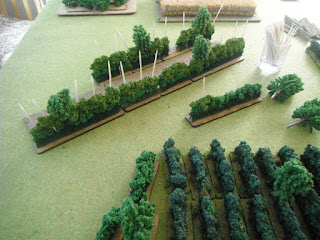 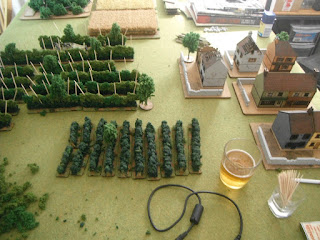 That's going to keep me pretty busy this week, but I'm sure it will be worth it. I'm also keeping in mind that down the line I'll need to use the terrain for the American Rebellion, (I like that, I think I borrowed it from CK), which will involve lots of fence building etc.

I now have my copy of 'Sharpe Practice' but only really had time for a flick through. Looks good though, written in typical 'Lardy' language and humour, hand to hand fighting becomes 'fisticuffs' for example. I'm still going with Fife & Drum with the focus on the Philadelphia campaign of 1777 and 1778, Brits in cut down/ de laced uniforms with overalls replacing knee breeches etc, can't wait!

Finally, I'm about done with BA purchases, just need to add a couple of artillery pieces and possibly a Typhoon ground attack aircraft. Tanks are progressing well with the three Sherman's close to completion, I'm tempted to add a Firefly or M10 to add a bit more punch to the Allied armour. A second StuG assualt gun and a Panzer III are awaiting construction.

'Cavalier 2016' is not far away and this year I will be there for the first time in several years, looking forward to it.