I have now played through 3 complete turns of this 6 turn scenario, and the Bolt Action rules are working beautifully and producing an exciting game that works well playing solo, as the activation system means that you never know who will get the next order dice. The attacking Germans have had a tough time trying to push forward and have taken heavy casualties, the veteran grenadier squad were decimated by MG fire as they attempted to rush across an open field to gain cover by the hedgerow, eventually having 3 'pins' on them. They went 'down' and hit the dirt but suffered further casualties and failed a morale check. Pinning is a vital part of the game as it represents fire suppression, requiring an order test before carrying out the given order. If passed (and order/morale checks are all a straight 2 dice throw with few modifiers, minus 1 for each pin marker and loss of squad NCO), so no charts to consult other than remembering it's a 10 or less for veterans, 9 for trained regulars and 8 for recruits/conscripts. If no pin markers then the unit is activated as normal, all very easy and straghtforward. A pinned squad that passes an order test loses 1 pin marker and follows orders, otherwise the unit goes 'down' for that turn and loses it's order.

Once again the Sherman was hit on turn 2, but this time the shot damaged the tracks leaving it disabled and unable to move for the rest of the game! It could still shoot though, and it managed to get off an AP shot at the StuG which bounced again. As German troops with AT weapons were now rushing towards it, the Sherman also fired it's hull MG, spraying the troops in the open field and pinning them as well as causing heavy casualties, but it was now a sitting duck and the next shot from the Stug sent it up in flames. The half track was destroyed by a bazooka team, through it's side armour.

At start of turn 4 the advantage is with the defending Yankees as they have suffered far lighter casualties, but the Germans have the Stug still operational. A few more pics of the game in progress.

On a side note I noticed that I lost a few followers after the 'Hitler Youth' post and I can only think that some may indeed have found it difficult, as it troubled me at the time I posted it. The fact is that I have spent the past year researching and learning as much as I can about this period and  it's impossible to separate the regime from the military history. But I will admit that I have a new found respect for the average German soldier in the field, and I say that as one who had family serve in both wars. For me, this scene from 'Generation War' (with subtitles) represents the courage of the German infantryman fighting house to house against Russians, the music score lifts it to another level and I find it quite stunning.


Figures for the American Rebellion.
It's been tough making the final choice of figures for this project, it's between 28mm Front Rank and  '1/56th scale' (approx 30mm) Fife & Drum, with F&D having a clear edge for me in terms of the more naturally slim and well proportioned castings. I'm also looking at the undercuts and raised areas in general to see which will best handle the painting style I plan to use on them, which will see a lot more drybrush work than is my norm, again F&D look most suitable. First figure order will go in shortly.

This pic from the F&D website clearly illustrates the fine casting quality of these figures, not from the AWI range but same sculpter Richard Ansell and cast by Griffin Moulds, probably one of the best in the country for producing clean crisp castings, free of mould lines and flash. Do toy soldiers get any finer than these? 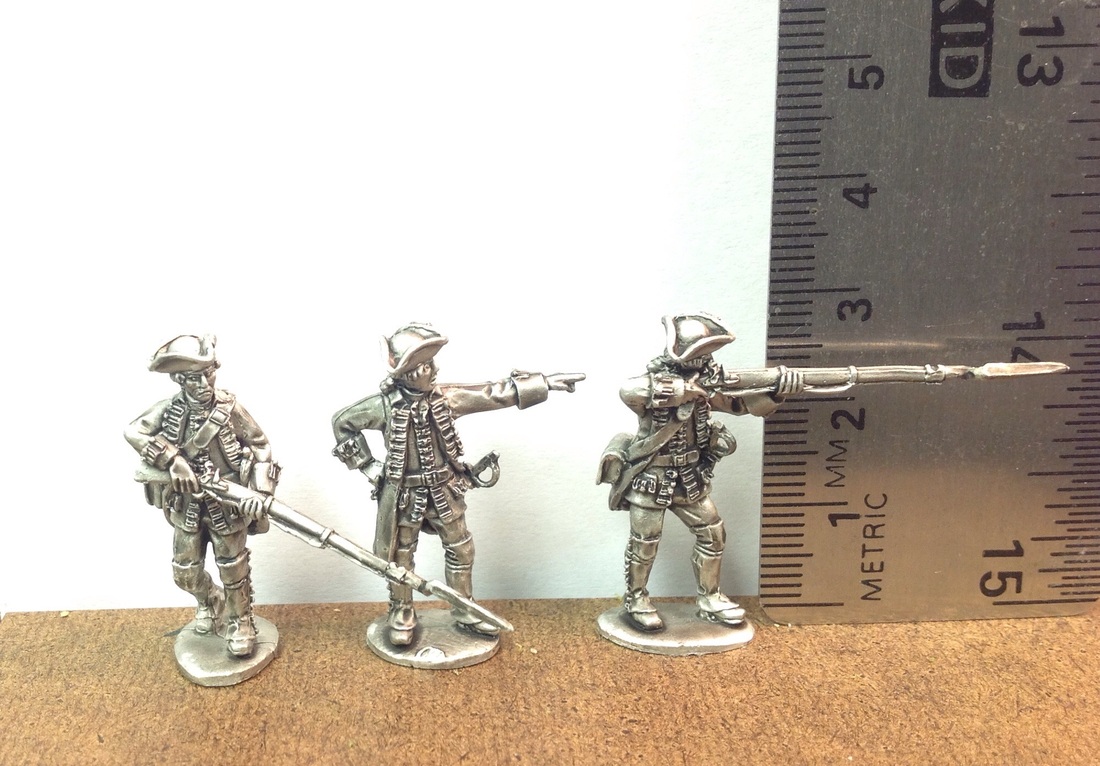